Abstract
Primary Sjögren's syndrome (pSS) is a chronic autoimmune rheumatic disease with symptoms including dryness, fatigue, and pain. The previous work by our group has suggested that certain proinflammatory cytokines are inversely related to patient-reported levels of fatigue. To date, these findings have not been validated. This study aims to validate this observation. Blood levels of seven cytokines were measured in 120 patients with pSS from the United Kingdom Primary Sjögren's Syndrome Registry and 30 age-matched healthy non-fatigued controls. Patient-reported scores for fatigue were classified according to severity and compared to cytokine levels using analysis of variance.

Cytokine levels, disease-specific and clinical parameters as well as pain, anxiety, and depression were used as predictors in our validation model. The model correctly identifies fatigue levels with 85% accuracy. Consistent with the original study, pain, depression, and proinflammatory cytokines appear to be the most powerful predictors of fatigue in pSS. TNF-α and LT-α have an inverse relationship with fatigue severity in pSS challenging the notion that proinflammatory cytokines directly mediate fatigue in chronic immunological conditions.
KEYWORDS:
Cytokines; Fatigue; Primary Sjögren’s syndrome; Proinflammatory
PMID: 31250166 DOI: 10.1007/s00296-019-04354-0

This is a weird but cool study. 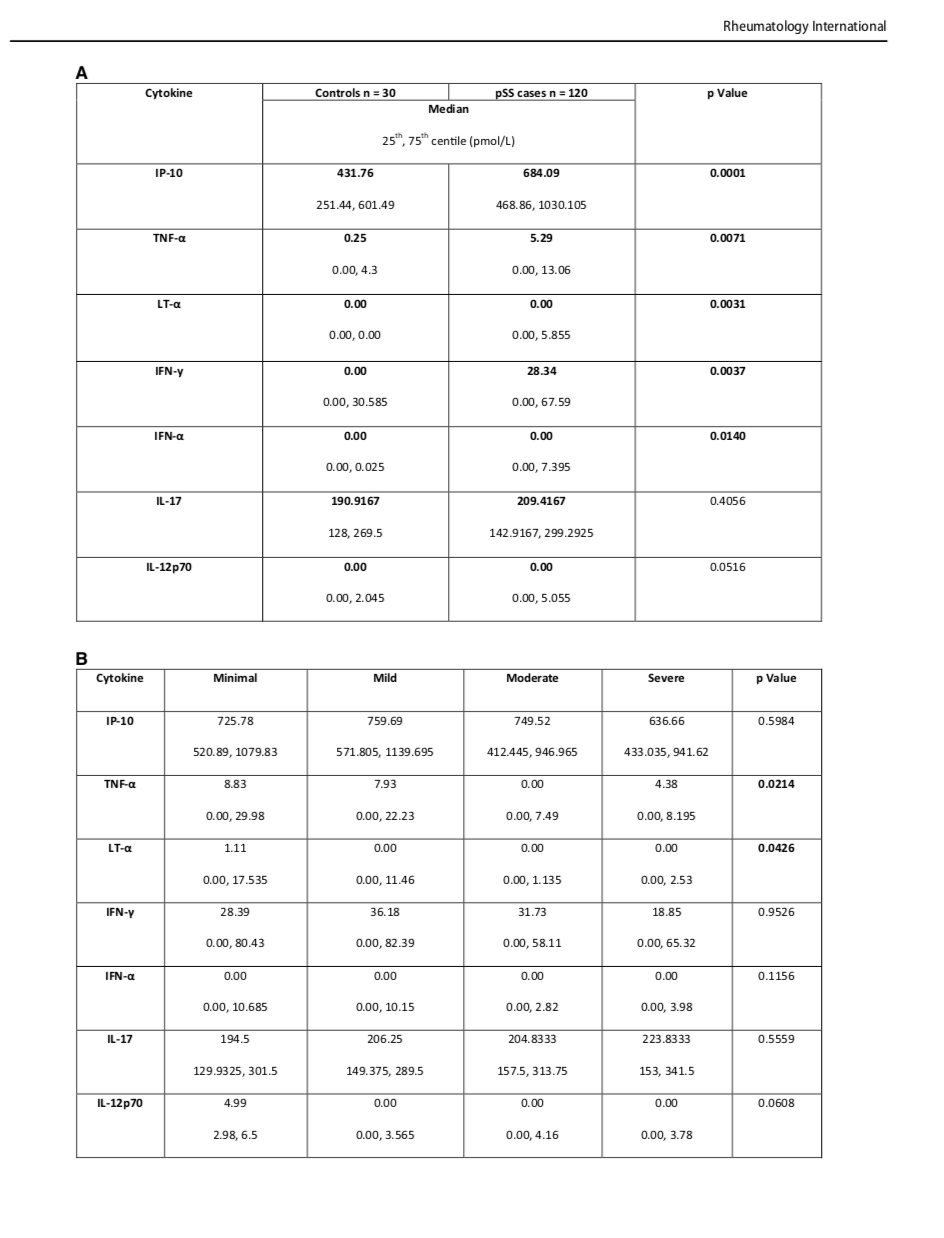 cytokine signature might correlate with lymphocytes and NK cells profile;
A pity they didn't investigate the immune cells profile of their patients, we could have find some common pathway between Sjogren fatigue and ME/CFS (or not)!
It would be valuable as well to look for correlation with anti-Ro (SSA) and anti-La (SSB) antibodies and for anti-M3R antibodies.

Methods:
To explore mechanism of fatigue, a cohort of 71 patients with primary Sjögren’s syndrome were investigated.
CSF samples where available from 49 patients.

A method based on liquid chromatography coupled with tandem mass spectrometry (LC-MS/MS) was developed for measurements of Hcrt1.

Hcrt1 was measured in CSF samples from 22 healthy subjects and 9 patients with narcolepsy type 1.

Measures of HSP32, -60, -72, and -90α in plasma revealed that the concentrations of HSP90α were significantly higher in pSS patients with high fatigue versus low fatigue.

A tendency toward higher concentrations of HSP72 was observed in patients with high fatigue compared to patients with low fatigue.
....
Analysis of IL-1β related proteins (IL-1Ra, IL-1RII, and S100B), IL-6, and Hcrt1 in CSF demonstrated that IL-1Ra showed significant association with fVAS scores together with the clinical variables BDI scores and pain scores.

The relationship of the biochemical variables was explored in PCA, and two significant components appeared: Variables related to IL-1β activity dominated the first component while in the second component there was a negative association between IL-6 and Hcrt1.

Fatigue was introduced as an additional variable in a second model. In this PCA, fVAS scores were associated with the first component as was the IL-1β related variables. In addition, the second PCA model revealed a third component that showed a negative relationship between Hcrt1 and fatigue.


I) HSP90α and to a lesser degree HSP72 in blood may possibly be parts of a fatigue inducing mechanism.


II) The LC-MS/MS method with high selectivity and accuracy revealed considerably lower levels of Hcrt1 in CSF than previously reported.


III) IL-1β signaling is a primary driver in fatigue. Several other proteins and molecules interact with IL-1β in a complex network, in which several cell types (neurons, microglia, and astrocytes) probably participate.


IV) Hcrt1 also influences fatigue, but probably through another pathway than the IL-1􀁅 route.
Click to expand...

Objective
To assess the safety and efficacy of RSLV‐132, an RNase Fc fusion protein, in a phase II randomized, double‐blind, placebo‐controlled clinical trial in patients with primary Sjögren’s syndrome (SS).

Results
Patients randomized to receive RSLV‐132 experienced clinically meaningful improvements in the ESSPRI score (P = 0.27), FACIT‐F score (P = 0.05), ProF score (P = 0.07), and DSST (P = 0.02) from baseline to day 99, whereas patients who received placebo showed no changes in any of these clinical efficacy measures. This improvement was significantly correlated with increased expression of selected interferon‐inducible genes (Pearson’s correlations, each P < 0.05).

Conclusion
Administration of RSLV‐132 improved severe fatigue, as determined by 4 independent patient‐reported measures of fatigue, in patients with primary SS.

RSLV-132 is a novel fully human biologic Fc fusion protein that is comprised of human RNase fused to the Fc domain of human IgG1. The drug is designed to remain in circulation and digest extracellular RNA with the aim of preventing activation of the immune system via Toll-like receptors and the interferon pathway.

Murph said:
This is a weird but cool study.

Here's the data tables from the study. Table A is controls vs patients. Patients have higher cytokines in six of the seven cytokines measures. Table B splits patients up into groups depending on how severe their fatigue is, and for two of the seven cytokines, the patterns appears to reverse! People who *feel* healthier, have higher cytokines!
Click to expand...
This correlates with what I understand of my disease, nothing show up in various test because my genes naturally protect against high cytokine release.
MBL deficiency is one of the common genetic immune defect that protects against high cytokine release, preventing severity in some auto-immune disease, like Sjogren and Psoriasis, preventing diagnosis.

https://clinicaltrials.gov/ct2/show/NCT04944121
It appears they are assessing whether this drug can help patients with long COVID.