The more you know!​
So, the parasympathetic branch of the autonomic nervous system is responsible for producing a penile erection (or vaginal lubrication) in response to stimulation.

This means that if there is a problem with this part of the autonomic nervous system, one might experience erectile dysfunction, and that would be a form of dysautonomia.

Specifically, autonomic nerves stimulate the endothelial cells of blood vessels in the penis to produce nitric oxide (NO), which causes the blood vessels to dilate, greatly increasing blood volume in the penis.

Of course, people love to attribute other causes to erectile dysfunction, especially psychological ones...

Besides dysautonomia, a problem with the endothelial cell production of nitric oxide could also cause erectile dysfunction, and this would be a form of endothelial dysfunction.

Hormonal disruptions such as testosterone deficiency or excessive prolactin, which could be related to hypothalamic dysfunction, can also lead to erectile dysfunction as these hormones affect the autonomic nervous system. 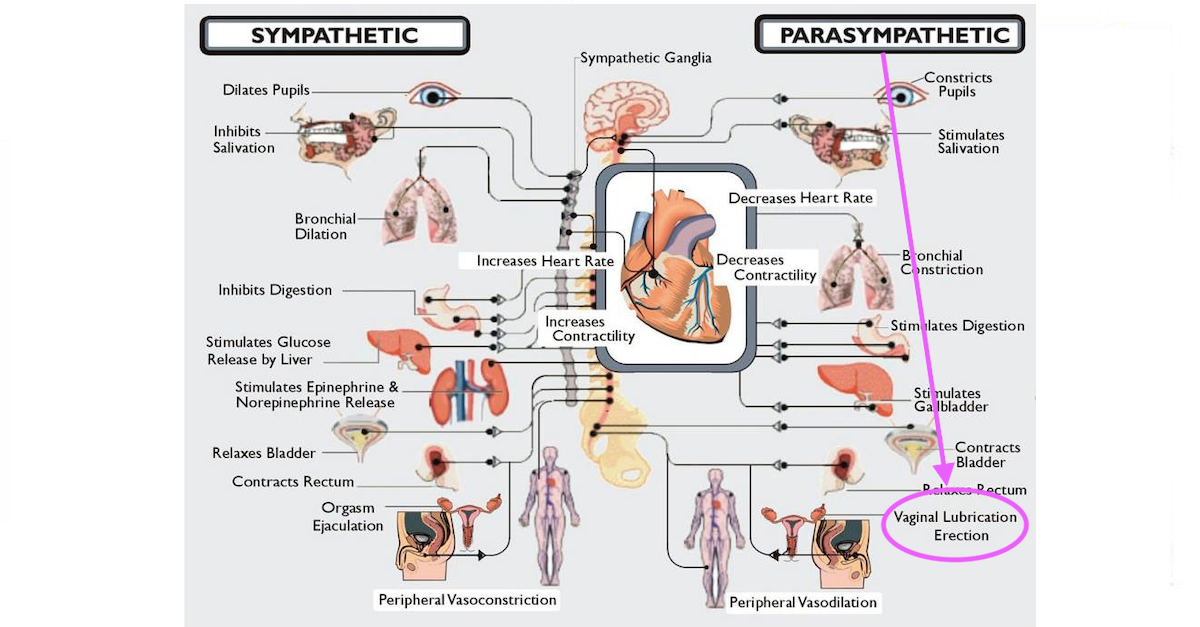 Does anyone know of any studies that asked about erectile dysfunction in ME?

All I can find is this one from Taiwan:

We conducted a retrospective cohort study by using data from the National Health Insurance (NHI) Research Database. We identified 2156 male patients who were newly diagnosed with CFS between January 1, 2003 and December 31, 2006. After excluding those younger than 20 years and prevalent cases, 1976 patients were subjected to analysis, and 7904 people served as healthy controls. All study subjects were followed up from the index date to the date of organic ED diagnosis, withdrawal from the NHI program, or the end of 2011.

The combined impacts of patients with CFS and cardiovascular disease (CVD), diabetes mellitus (DM), chronic kidney disease (CKD), depression, and anxiety showed a significant by joint association with organic ED risk compared with patients with no CFS and no counterpart comorbidity. The greatest magnitude of adjusted HR of ED for CFS was observed in individuals without any comorbidity (3.87, 1.95–7.66).


I would now link to all the discussions here on Phoenix Rising about erectile dysfunction, but they are all private discussions...

Just as an aside, for male physiology, the first year med school mnemonic for which part of the autonomic system was responsible for which aspect was:

I was remembering how at one point people were trying meds like viagra for ME/CFS.

Different regions of the stem brain, explain different manifestations of ME.
K

Marylib said:
I was remembering how at one point people were trying meds like viagra for ME/CFS.
Click to expand...
If if it's not contraindicated on a personal level, it's worth a shot for any condition that involves having chronic pain at least. Cialis (tadalafil) can be a better one to try though as it has longer period of efficacy than viagra. There is a small body of research work to support tadalafil being effective for pain in Chronic Regional Pain Syndrome, Pelvic Pain Syndrome and Loin Pain Hematuria Syndrome.

Interesting brief mention of tadalafil aiding with improved cognitive impairment in this article though;
https://wjmh.org/DOIx.php?id=10.5534/wjmh.200027

On a related note:

Many people here on Phoenix Rising, of different genders, have reported severe PEM after orgasm. They report that the severity of the PEM is not related to any exertion related to the orgasm, but seems to be a direct effect of the orgasm itself.

I would now link to all the discussions on this topic, but they are all private discussions, except one: