Katherine Cheston scanned in a copy of the article: 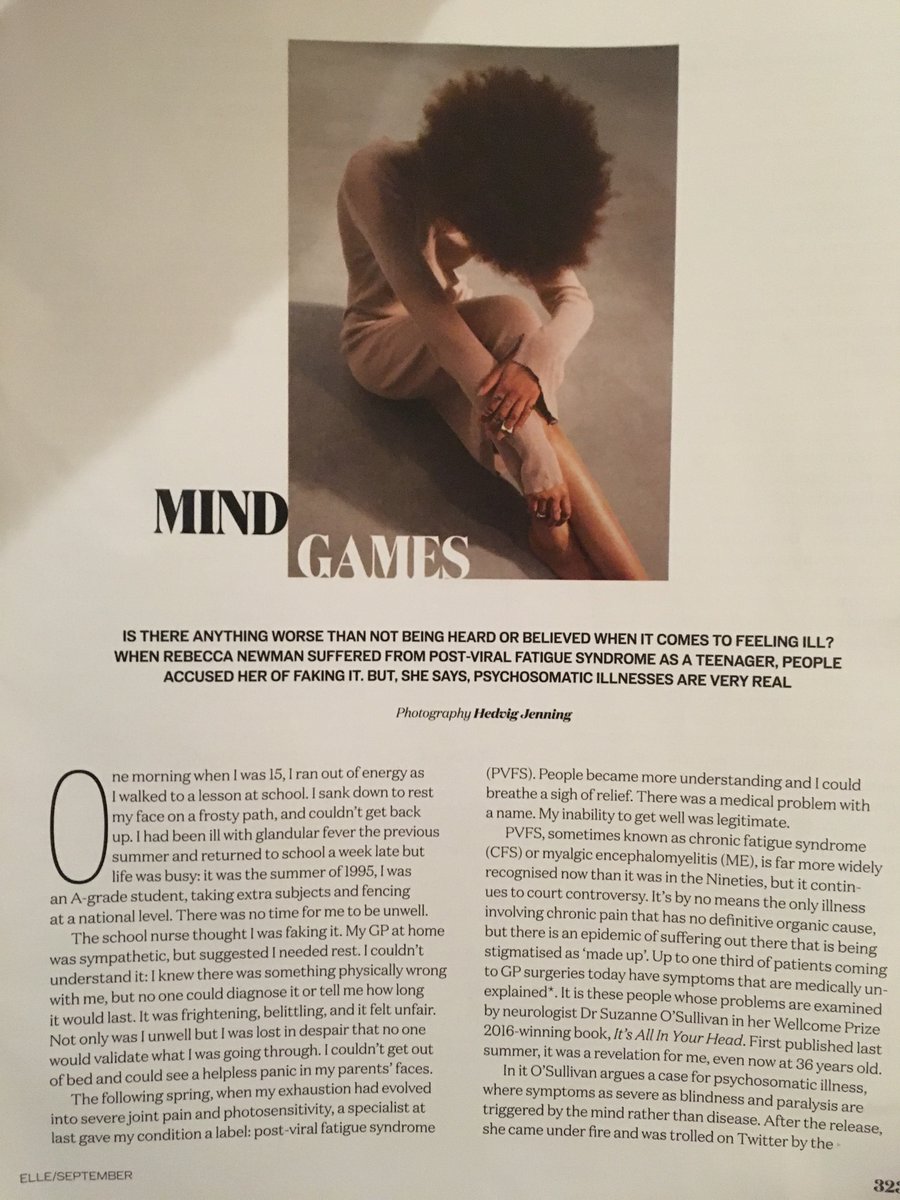 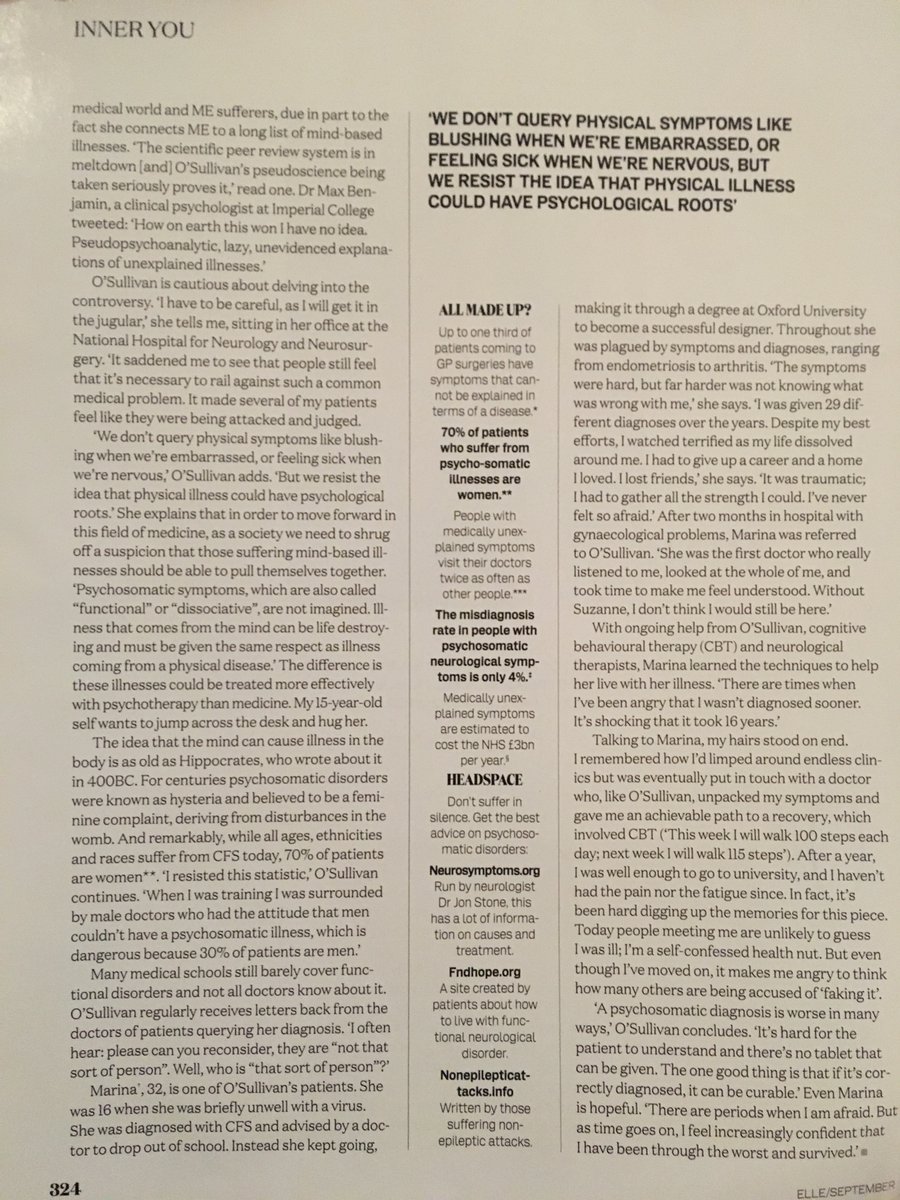 I don't think that the author of this article knows what 'trolling' is.

No cure then? Which strongly implies no explanation either.

What she really learned was to misinterpret, even deny, her real health situation.

Not to mention that "ongoing help" is a very convenient source of income, power, and status for the likes of O'Sullivan and therapists.

All of those links are for pseudoneurological conditions. It's (relatively) easy for neurologists to determine if a condition truly arises from the nervous system, but I don't see how that applies to PEM, for example. I wonder if Sullivan's book deals with non-neurological symptoms.

Way to miss the point. Psychosomatic illness is assumed to exist because lab tests don't show any abnormality. This is the same logic as concluding that astral influences must be the cause since tests are normal. There is no logical connection between the absence of abnormal tests and a specific cause.
Last edited: Aug 13, 2016

I don't know how she got away with this; the arrogance. If there is any right to reply:
"
Historical examples of psychologizing problems with organic causes
Lupus, multiple sclerosis, AIDS, and Lyme disease suffered similar fates before “tissue evidence” was available. Patients were belittled by armchair speculators masquerading as scientists. Who among us believes this was helpful? A simple “I don't know” would have been better than specious speculation.

The authors confuse absence of evidence with evidence of absence. They are not the same. Absence of evidence may reflect insufficient research, inadequate technology, poor methods, flawed paradigms, closed minds, or lack of clinical experience; for example, in 1980, there was no clear evidence that AIDS was viral—blood products were considered “safe.“….

The chronic fatigue syndrome and fibromyalgia (probably the same disorder) are characterized by considerable suffering and disability. We must not add to that suffering by trivializing patients with “functional” labels. Marginal care inevitably ensues.

I was hoping that this was going to be another article like the one in the German Brigitte, and it seemed to start well, but unfortunately I had to stop reading at "My 15-year old self wants to jump across the desk and hug her". Anecdotes and revelation instead of evidence? If that's what she's into it's up to her I suppose, just wish such harmful rubbish didn't get published. She seems happy to accept the leap of faith from blushing and having a nervous stomach to psychosomatic causes of disease without question in her eagerness to experience her revelatory moment.

Some of those factiods down the middle don't ring true either -

70% of patients who suffer psychsomatic illnesses are women - how can you have 70% of zero and assign a gender to it?

People with MUS visit their doctor twice as often as other people - can we define the control group a bit more specifically than "other people"? Patients with other illnesses? People who aren't ill? If anecdotal evidence is allowed, I haven't been to my Dr for about a year, which means "other people" go every 2 years at the most, which I know isn't true because my neighbour went last week and she hasn't got ME.

The misdiagnosis rate in people with psychosomatic neurological symptoms is only 4% - Not quite sure I understand what this means, a claim that O'Sullivan and her ilk are only wrong 4% of the time? I'd put her misdiagnosis rate at closer to 100% myself.

Don't suffer in silence - at last some good advice, ME patients have stopped suffering in silence, and calling it trolling, vexatious or whatever you want will not silence anybody.

I thought PVFS was less than 6 months and cleared up, so not the same as ME?

TiredSam said:
70% of patients who suffer psychsomatic illnesses are women
Click to expand...
Not sure why that is considered important. Some unspoken reference to Freud's hysteria perhaps? In any case, gender differences in disease distribution is nothing extraordinary, 78% of patients with autoimmune diseases are women.
http://www.ncbi.nlm.nih.gov/pmc/articles/PMC2527069/

the patient in question was clearly suffering from post-viral fatigue and I dont know of any doctor who might advise immedately dropping out of school, this would be something a GP might suggest to a partent and child if going to school was making them much much worse, and GPs would suggest returning to school if symptoms improved - so I dont believe that statement off the bat.

Second the article really makes me believe the patient was suffering from hyochrondrias, having multiple illness presentations and they clearly suffered from anxiety and depression. Now, OSullivan said before that she and most neurologists have given up on CFS patients, she said she doesnt even see them in clinic anymore, - so very weird to see here now being a champion of a patient with CFS. Clearly CBT may well have helped this patient. This is classic OSullivan territory, its one anecedotal case from OSuillivans case book, but a lot of other random facts thrown in to make a narrative based purely on her beliefs, not clear science with facts. Why complicate a nice story with facts?
Last edited: Aug 13, 2016
V

Keith Geraghty said:
Now, OSullivan said before that she and most neurologists have given up on CFS patients, she said she doesnt even see them in clinica anymore, - so very weird to see here now being a champion of a patient with CFS.
Click to expand...
Yes, I thought it was quite odd that she's pushing the ME angle despite admitting to have pretty much no knowledge about it or contact with ME patients. But ME is what got her (negative) attention for her book, so she's pushing that angle instead of a more vulnerable illness where there isn't thousands of papers proving it's a biomedical condition.

My conclusion is that she's just another attention-seeker who is more concerned with being known and heard than she is with making any real contribution to anything or anyone.

Couldn't resist going back to read the rest of it once my HR monitor had stopped beeping, and after reading O'Sullivan pose the following question to herself:

Well, who is "that sort of person"?
Click to expand...
Was looking forward to seeing how she would answer it. Unfortunately she didn't, so I'm left wondering whether it was rhetorical and she is claiming that ME patients have no typical personality traits (which would be a refreshing breath of fresh air in an otherwise most unsavoury gust) or whether Marina is "that sort of person" and we can just work out the rest for ourselves.

I told you I was ill

.
I think PDWhite et al know they cannot win the CBT/GET war - so they are backing the popular science books to do their work of popularising belief in psychosomatisation (especially of ME) and mind over matter to an uncritical readership.


Three popular 'science'/'history' books in the last year (ish) which all have chapters on 'CFS' and all construct ME ('CFS') as psychosomatic, or 'curable' by CBT/GET.

.
And Jo Marchant's 'Cure- A journey into science of Mind over Body', which features an interview with Professor White and an unashamed promotion of PACE.
https://www.amazon.co.uk/Cure-Journ...857868624/ref=cm_cr_arp_d_product_top?ie=UTF8


.
Jo Marchant's 'Cure' is on the shortlist for the Royal Society Science book of the year.
https://royalsociety.org/grants-schemes-awards/book-prizes/science-books-prize/

I told you I was ill

Wildcat said:
I think PDWhite et al know they cannot win the CBT/GET war - so they are backing the popular science books to do their work of popularising belief in psychosomatisation (especially of ME) and mind over matter to an uncritical readership.
Click to expand...
Perfectly expressed.

Esther12 said:
I really can't decide whether O'Sullivan is playing a clever political game, or just completely stupid.
Click to expand...
Have you read the book? As far as all the recent epidemic of books about hysteria and psychosomatic illness, O'Sullivan's book has the most depth and seems the most plausible. To an outsider, to someone who is not scientifically trained (or a patient of the illnesses in question), her book seems plausible and even sympathetic in some respects. To these readers, they think that the treatments that O'Sullivan proposes are effective or that the patients will improve in time anyway. So such a reader will not be worried that patents are being neglected and given ineffective treatments.

These articles are all about promoting the book/increasing sales.

.
The promoton of the books ideology as "compassionate", "sympathetic" etc is pure emotional manipulation. There is obviously nothing "compassionate" about constructing serious physical diseases as psychosomatic. As we well know. The media/public do love these books, the reviews are gushing (as they loved Elaine Showalter's 'Hystories' nearly 20 years ago).

Snow Leopard said:
Have you read the book?
Click to expand...
I have - all of it. It's instructive to read about the apparently flagrant malingerer and the lady who thinks she's lost her eyesight, but mainly it's instructive to see how eager certain clinicians are to sweep as many patients as possible with problematic conditions into the bottomless dustbin of a psych-diagnosis.

Books like this succeed partly because large numbers of people like to read books that confirm some of the more fundamental beliefs they happen to already hold: in this case that in most areas of our lives, including our health, there are nearly always easy answers to difficult problems. Although in the case of most of the patients in her book O'Sullivan doesn't demonstrate that her intervention has either cured or even helped the patient, this is clearly a minor detail to most readers that doesn't in the least undermine O'Sullivan's standpoint.
W

People with MUS visit their doctor twice as often as other people
Click to expand...
After a brief flurry of activity when I was first ill, I learned very quickly not to visit my doctor unless I wanted to be patronised and/or sent to a psychiatrist. To link this to ME patients seems fanciful - there is plenty of survey evidence showing that we go years on end without seeing doctors.

The misdiagnosis rate in people with psychosomatic neurological symptoms is only 4%
Click to expand...
But of course ME patients' neurological signs are marginalised in favour of fatigue, so presumably they aren't contained in this statistic, which in itself is likely to be self reinforcing in the way that all MUPS diagnoses are - "we don't know what's wrong with them, so it must be psychosomatic". Unless they're claiming that there is only a 4% misdiagnosis rate for ME, which is laughable.

Medically unexplained symptoms are estimated to cost the NHS £3 billion a year...
Click to expand...
...because everyone who has them are malingering scumbags intent on wasting your money, rather than getting themselves that good old time religion with Dr. O'Sullivan. You heard it here first. Or not.

O'Sullivan is cautious about delving into the controversy. "I have to be careful, as I will get it in the jugular", she tells me...
Click to expand...
I am tiring of O'Sullivan's 'little old me' routine. Always reminds me of the lyrics to this song:

Anyone know where we can comment on the article? The "trolls" (or, as I prefer to think of us, the respectful, evidence-based comentariat) have been summoned...but where do we go?