According to twitter they've found alpha synuclein in most pots patients and it's linked to a variety of other diseases. But someone on twitter also said the study has flaws.

the question it raises would be, these 30% of POTS patients with P-Syn in their skin autonomic nerves...Do they have an already known alpha‐synucleinopathies, or do they have another one that is not yet identified?


Results
Of 296 patients seen with POTS, 22 patients with suspected neuropathic POTS had skin biopsies performed during their evaluation.

Seven of 22 patients had P‐SYN present on skin biopsy, while 15 individuals did not.

Those with P‐SYN on biopsy: (1) were more likely to be male; (2) had features of REM sleep behavioral disorder; (3) reported less sleepiness and cognitive impairment; and (4) noted greater symptoms of gastroparesis.

On autonomic testing, the group with P‐SYN deposition was more likely to have a hypertensive response to tilt‐table testing and abnormal QSART responses. 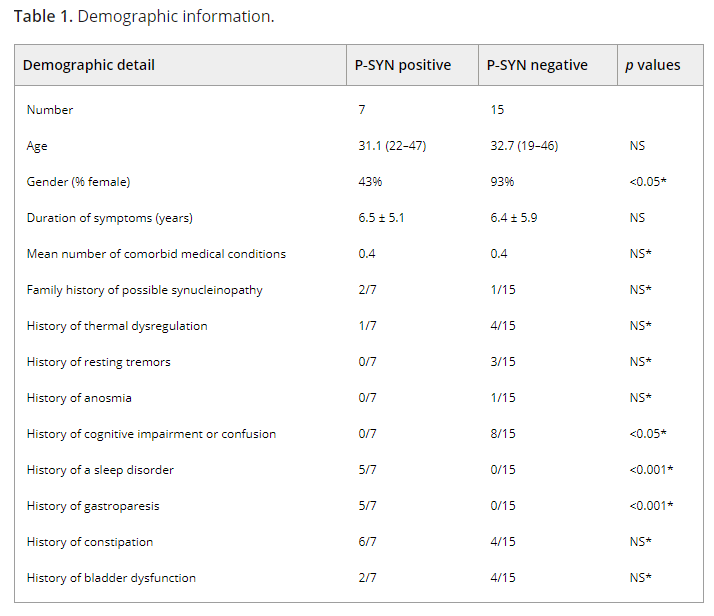 The intra‐epidermal nerve fiber density (IENFD) was similar in those with and without P‐syn, although there was a trend for those with P‐syn on biopsy to have skin biopsy results consistent with a small fiber neuropathy (4/7 cases had reduced IENFD) versus those with normal synuclein staining in whom only 2/15 had reduced IENFD (p = 0.08).
Click to expand...
There were significant differences in sympathetic cholinergic function, as measured by QSART.
In the group without P‐syn, 2/15 patients had one or more reduced QSART responses.
In contrast, the group with abnormal P‐syn had 6/7 patients with at least one abnormal QSART response (p < 0.05, Fishers exact test)
Click to expand...
note:
The quantitative sudomotor axon reflex test (QSART, or sweat test) measures the nerves that control sweating.

Well, it's not 30% of POTS patients. It was a study with 296 participants and then of those 22 with suspected neuropathic POTS were given skin biopsies and 7 of those tested positive for P-SYN. Would be very interesting to see what the results would be if all 296 were tested. By choosing those particular patients out of the cohort they skewed strongly in favour of the positive result.

Still interesting, though, but not necessarily relevant to most POTS patients.