To compare the effectiveness of total disk replacement (TDR), anterior cervical discectomy and fusion (ACDF), and laminoplasty on atypical symptoms of cervical spondylosis.

Patients with confirmed diagnosis of cervical spondylosis and reported atypical symptoms such as blurred vision, headache, nausea, palpitation, tinnitus, vertigo, hypomnesia, and abdominal discomfort were retrospectively included in the present study. They were treated with TDR, ACDF, or laminoplasty depending on the etiology and patient preference.
Severity of the atypical symptoms before the surgery and at the end of 2-year follow-up was recorded and the degree of severity alleviation was compared between different surgical approaches.

A total number of 336 patients who were treated in our institute from February 2002 to March 2011 were included in the final analysis. Atypical symptoms were significantly alleviated in most patients after surgical intervention. No significant differences were found regarding the change of severity of those symptoms among patients in different surgery groups.

The present study compares the efficacy of TDR, ACDF, and laminoplasty on symptoms such as vertigo, headache, palpitation, nausea, abdominal discomfort, tinnitus, blurred vision, and hypomnesia in patients with cervical spondylosis and tries to explore its etiology.


One of the popular assumptions is that the degenerated structures such as osteophytes and hyperplasia of ligaments in the cervical spine could compress the surrounding blood vessels, which can partially block the blood flew into brain and cause headache and vertigo.[14–16]
Some authors also proposed that whiplash injury and instability of cervical spine are related to the onset of atypical symptoms.[17,18] However, the evidence provided by those studies was not convincing enough to drive a consensus about the mechanism of atypical symptoms in patients with cervical spondylosis.
...

In the present study, patients who received TDR and ACDF experienced significantly alleviated symptoms compared with that of before the surgery, this is in accordance with the previous studies.[21,22] However, patients in the double-door laminoplasty group have also reported significantly alleviated symptoms after the surgery, and the degree of symptom severity alleviation was not significantly different in the laminoplasty group than TDR and ACDF groups.

Considering that the only thing in common with all the 3 surgeries is the decompression of dura and spinal cord, we assume that the stimulation on dura and the spinal cord and the spinal meninges might be responsible for the atypical symptoms in patients with cervical spondylosis.
...

In this other study, some interesting datas about these atypical symptoms 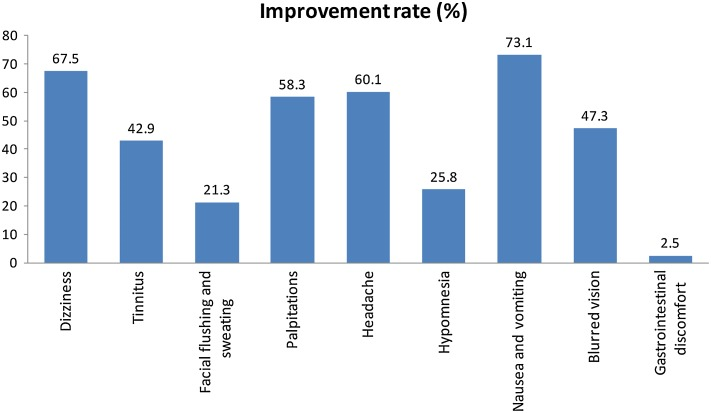 Thanks Patti I have some spondylosis goin on and I’ll have to check if it’s cervical or not. Fun!!

another study from Beijin, from orthopedic surgery department this time, april 2018

METHODS:Retrospective analysis was undertaken for 39 patients who were diagnosed as cervical spondylosis with sympathetic symptoms and underwent ACDF with PEEK cages. Radiographs obtained before surgery, after surgery, and at the final follow-up were assessed for quality of fusion. The following criteria were used for assessing radiographic success of fusion:
(1) endplate obliterated with no lucent lines;
(2) obliteration of disc space by bony trabeculae;
(3) less than 2°of intervertebral motion or 2 mm of motion between the spinous processes at the operated segment on flexion-extension lateral radiographs.

RESULTS:They were followed up for at least one year. The mean follow-up was 15.6 months. Radiographs of the cervical spine at the last follow-up revealed a solid fusion with no signs of a pseudoarthrosis in 36 cases. In two patients delayed union and bony fusion were achieved at the end of 9 and 11 months. Pseudoarthosis was found in 1 case but the patient had no symptoms. The score of sympathetic symptoms before surgery, 2 months after surgery and at the final follow-up were 8.4±1.0,2.2±0.3,and 2.4±0.3, respectively. There were 22 excellent cases, 15 good cases, 1 fair case and 1 bad case in terms of RR. Good to excellent results were attained in 95% of theses patients. The sympathetic symptoms improved in all the patients and the score was significantly improved after surgery. There was one patient who had cerebral spinal fluid leakage but he recovered one week after surgery. Two patients felt a mild swallowing discomfort, but it disappeared within one month after surgery. Subcutaneous hematoma occurred in one patient due to obstructed drainage. It was cleared two days after surgery. CONCLUSION:Cervical spondylosis patients with sympathetic symptoms may be managed successfully with ACDF using PEEK cages. Successful clinical results regarding symptom improvement and general satisfaction with the surgical procedure depend not only on obtaining successful decompression and radiographic fusion but also on patient selection.
You must log in or register to reply here.
Share: Facebook Twitter Reddit Pinterest Tumblr WhatsApp Email Link