At last some coverage of the retrovirus this morning in the BBC news, very cautious report and refering to it as a virus not as we know a retrovirus. Hopefully this will encourage our UK press to do some sensible coverage.

Sorry it doesn't appear to be about XMRV research.

Dundee University in Scotland has done research on children with ME and found problems with their white blood cells which they believe is as a result of a current viral infection.
25 children in a study of 50.

But no link with XMLV or MLV research.

ME and the BBC

Many thanks for the link into BBC news.

How ridiculous that no mention of XMRV and MLV.

However reading the article in your link the researchers only found indications of an on going INFECTION. The jump that it is a virus is only assumption.

Dundee Scotland University did the study - Parts of Scotland are known endemic areas for Lyme Disease and the positive tested cases this year exceeded 600. Dr Ho Yen says the real figures could be 10x that ie 6000 then consider that many of us with lyme are ill 10,20 or more years that is an awful lot of possible cases of Lyme the majority of which will not even know the cause of their illness.

Coming from an ME/CFS diagnosis myself who found eventually that it was Lyme Disease and have recovered on long term antibiotics, I am well aware of the controversy over the diagnosis and treatment of lyme Disease.

Eurolme a chat Line I joined 75 % of members were first diagnosed with ME/CFS before finding they actually have Lyme Disease.

The Lyme Doctors are also finding some Lyme patients to be also positive for XMRV there are so many parrallels with these illnesses politicaly as well as symptoms.

If anyone wants to read more visit UK charity at www.lymediseaseaction.org.uk

It is on the BBC iPhone and iPad app.

Friends in UK tweeting me they saw it on the morning TV news.
So we have the thinking general publics attention. This is good.

Greg.
Australian with friends in UK. 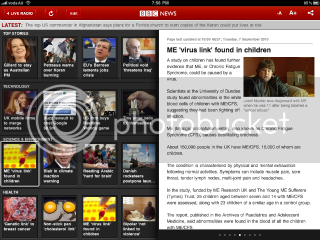