Excessive daytime sleepiness (EDS) is a frequent cause for consultation and a defining symptom of narcolepsy and idiopathic hypersomnia (IH). The associated mechanisms remain unclear. Lipocalin-type prostaglandin D synthase (LPGDS) is a plausible sleep-inducing candidate.

This study is to compare cerebral spinal fluid (CSF) and serum LPGDS levels in patients group with hypersomnia of central origin, including those with narcolepsy type 1 (NT1) and type 2 (NT2) and IH, to those in healthy controls (Con).

In contrast to significant differences in CSF Hcrt-1 levels, CSF L-PGDS levels and serum L-PGDS were comparable among NT1, NT2, and IH (p > 0.05), except for slightly lower serum LPGDS in IH than in NT1 (p = 0.01).

As a somnogen-producing enzyme, CSF/serum LPGDS may serve as a new biomarker for EDS of central origin and imply a common pathogenetic association, but would complement rather than replaces orexin markers.
Click to expand...
introduction
...
Among them, prostaglandin (PG) D2 (PGD2) is recognized as a potent endogenous somnogen. In the central nervous system, PGD2 is mainly synthetized from PGH2 by lipocalin-type PGD synthase (L-PGDS); this is the second most abundant protein in CSF, and also present but in much lower concentration in serum [11].

PGD2 can induce sleep indistinguishable from physiological status as an endogenous sleep substance or by exogenous administration [12,13].

In humans, the PGD system may be involved not only in physiologic sleep [14], but also in several diseases presenting hypersomnia or sleep disturbance symptoms, such as major depression and restless leg syndrome (RLS).

Both disorders were reported to have increased PGD2 activities reflected either directly by testing salivary PGD2 using radioimmunoassay in patients with major depression [15] or indirectly by measuring L-PGDS through proteomic analysis of the CSF in patients with RLS [16].

Elevated levels of circulating L-PGDS in serum were also detected in OSAS patients with EDS, but not in those without EDS [17], suggesting a possible role in the pathophysiology of sleep apnea symptoms. However, its relevance to EDS in narcolepsy and IH has not been convincingly demonstrated [18, 19].

We hypothesized that elevated production of endogenous somnogen-producing enzyme L-PGDS is involved in the pathogenesis of EDS in narcolepsy and IH, independent of the reduction of wake-promoting substance, i.e. CSF hypocretin-1 level.
Click to expand... 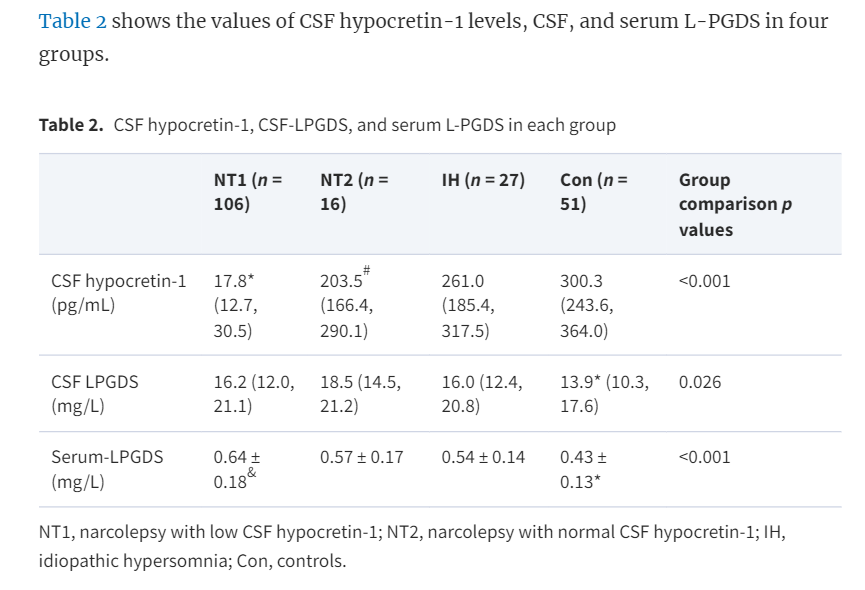 Discussion
...
In the current study, diseases known to elevate CSF or serum L-PGDS values such as cardiovascular, neurological and renal diseases were excluded, other may influence L-PGDS levels such as gender and sleep apnea seems did not play an major role. Increased CSF and serum LPGDS levels cannot be explained by any of the above-mentioned factors. Sampling between 10:00 am and 1:00 pm also limited a circadian effect on L-PGDS levels [2, 14].

Previous studies illustrated a possible role of PGD2 in the pathophysiology of daytime sleepiness in narcoleptic patients. Jordan et al. [18] found increased serum LPGDS levels in 14 narcolepsy patients, which correlated with EDS, but not with cataplexy. However, Bassetti et al. [19] reported a decrease of CSF LPGDS in another 14 narcolepsy patients.
The discrepancy between findings of low CSF L-PGDS levels and increased serum levels might be due to the higher CSF L-PGDS level in controls selected for the later study [19]. Indeed, simultaneously CSF and serum L-PGDS measurement from same subject in the current study supports an increase of the PGD system activity in the brain in NT1 and NT2 narcolepsy.

There are fewer studies investigating the biomarkers of IH with positive findings. In the current study, CSF and serum LPGDS levels in IH with normal CSF hypocretin-1 level increased to the same extent as in narcoleptics with and without hypocretin-1 deficiency. These results, taken together, demonstrate that LPGDS levels increased in three categories of hypersomnia patients of central origin, independent of hypocretin-1.
...
L-PGDS is dominantly produced in the arachnoid membrane, leptomeninges, choroid plexus and oligodendrocytes in the brain [27], where hypocretinergic neuron projections are rare.
...

In human studies, urinary or circulating L-PGDS levels in the normal and patients with OSA [14, 24] showed circadian variations coupled to the sleep wake cycle, with L-PGDS concentrations significantly higher at 4:00 and 8:00 am compared with 8:00 pm values, which is consistent with a circadian effect on the PGD2 concentration in rat CSF.
Click to expand...

Apart from sedation, PGD2 has some protective properties

Catalyzes the conversion of PGH2 to PGD2, a prostaglandin involved in smooth muscle contraction/relaxation and a potent inhibitor of platelet aggregation (PubMed:20667974).

Involved in a variety of CNS functions, such as sedation, NREM sleep and PGE2-induced allodynia, and may have an anti-apoptotic role in oligodendrocytes.

Involved in PLA2G3-dependent maturation of mast cells. PLA2G3 is secreted by immature mast cells and acts on nearby fibroblasts upstream to PTDGS to synthesize PGD2, which in turn promotes mast cell maturation and degranulation via PTGDR (By similarity).
Click to expand...
PTGDS Gene - GeneCards | PTGDS Protein | PTGDS Antibody

Edit, it's also linked to male baldness according to wikipedia:

"Furthermore, PTGDS and its product PGD2 are elevated in the bald-scalp areas of men with male pattern baldness (androgenetic alopecia).[7] "
Last edited: Jun 13, 2022

some plants chimical compounds that can inhibit PGDS:

Ricinus oil (do not take it orally as it is a strong laxative), however the transdermal power seems weak.

In silicoprediction of prostaglandin D2 synthase inhibitors from herbal constituents for the treatment of hair loss | Request PDF (researchgate.net)

I had this tested and it was actually low

I looked into a PGDS inhibitor, Acteoside, which other name is Verbascoside, a compound existing in lemon verbena (Lippia citriodora)...

The effects of lemon verbena ( Lippia citriodora ) verbascoside on the productive performance, plasma oxidative status, and some blood metabolites in suckling lambs (jafs.com.pl)

SlamDancin said:
I had this tested and it was actually low
Click to expand...
PGD2 can be produced in the brain by LPGDS, or in the blood by HPGDS.

PGD2 blood test is probably a marker of peripheral inflammation, but not a marker for brain PGD2;

Prostaglandin
Click to expand...
D2 (PGD2) is a major inflammatory mediator produced by mast cells and Th2 cells. PGD2 and its metabolites have been considered as selective markers of mast cell activation in vivo.

The expression profiles of these two prostaglandin D synthases vary, and H-PGDS is believed to be responsible for the production of PGD2 in the peripheral tissues and in immune and inflammatory cells.
Click to expand...
Prostaglandin D2
Click to expand...
(PGD2) and the cytokines tumor necrosis factor alpha (TNFα) and interleukin 1 beta (IL-1β) are inflammatory mediators and could be the molecular substrate for excessive sleepiness associated with infectious diseases.