Association between Chronic Pain and Alterations in the Mesolimbic Dopaminergic System

Association between Chronic Pain and Alterations in the Mesolimbic Dopaminergic System

Chronic pain (pain lasting for >3 months) decreases patient quality of life and even occupational abilities. It can be controlled by treatment, but often persists even after management.

To properly control pain, its underlying mechanisms must be determined.

This review outlines the role of the mesolimbic dopaminergic system in chronic pain.

The mesolimbic system, a neural circuit, delivers dopamine from the ventral tegmental area to neural structures such as the nucleus accumbens, prefrontal cortex, anterior cingulate cortex, and amygdala. It controls executive, affective, and motivational functions.

Chronic pain patients suffer from low dopamine production and delivery in this system.

The volumes of structures constituting the mesolimbic system are known to be decreased in such patients.

Studies on administration of dopaminergic drugs to control chronic pain, with a focus on increasing low dopamine levels in the mesolimbic system, show that it is effective in patients with Parkinson's disease, restless legs syndrome, fibromyalgia, dry mouth syndrome, lumbar radicular pain, and chronic back pain.

However, very few studies have confirmed these effects, and dopaminergic drugs are not commonly used to treat the various diseases causing chronic pain.

Thus, further studies are required to determine the effectiveness of such treatment for chronic pain. 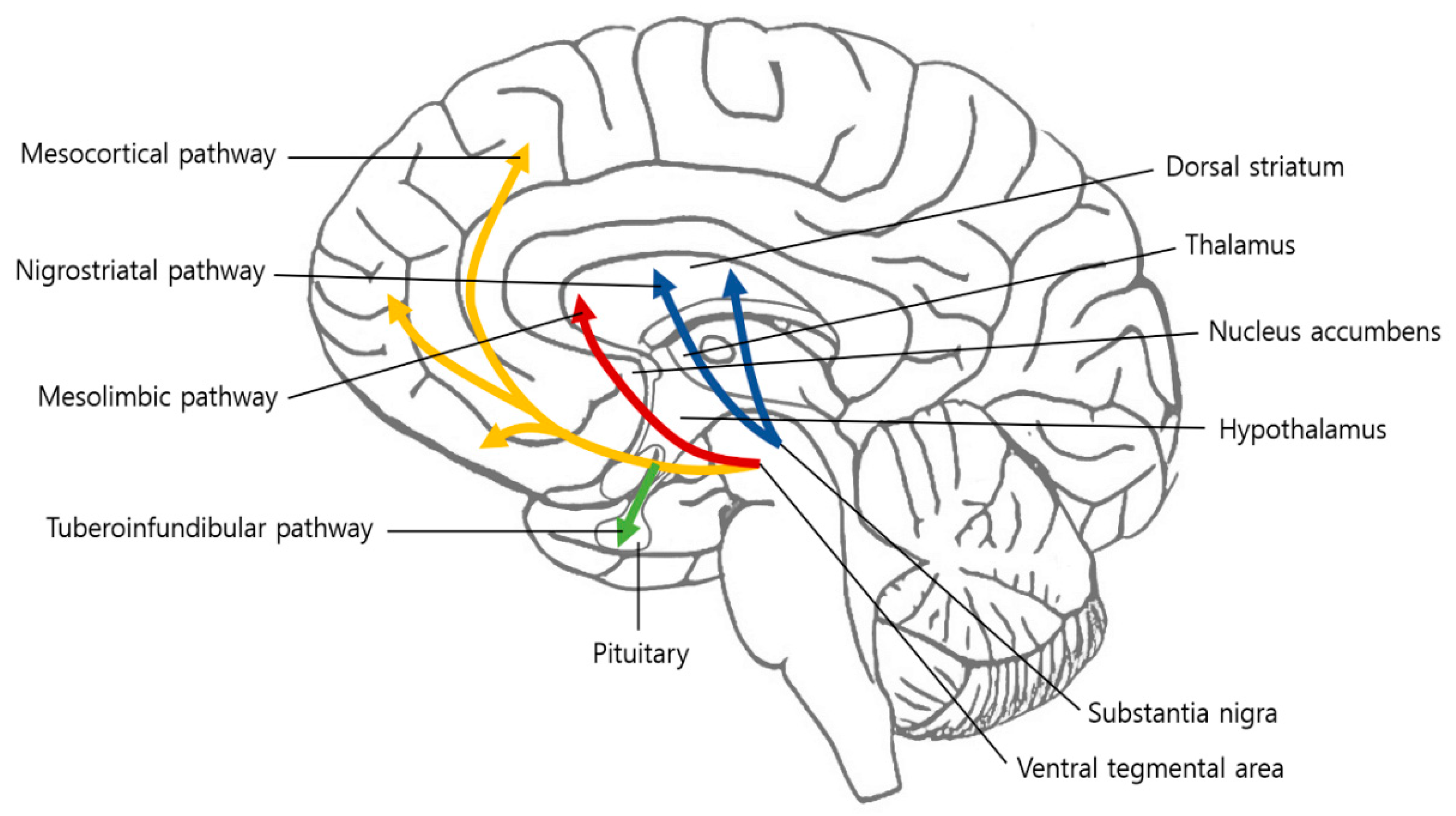 xebex said:
Yep Ritalin helps my pain, but sadly it causes rebound that makes my OI worse, interestingly rebound doesn’t make the pain worse.....
Click to expand...
Hemodynamic Profiles and Tolerability of Modafinil in the Treatment of POTS: a randomized placebo-controlled trial (nih.gov)

Yes I tried modafinil too and it was helpful for motivations but not pain and not as helpful as Ritalin - I couldn’t get out of bed the next day I think it did something to my acetylcholine receptors because I get the same day after hangover/extreme sleepiness from mestinon and Benadryl. Ritalin was the lesser of the 3 in side effects/hangover/ rebound.

This 2018 study found the same link between hyperalgesia and an altered mesolimbic dopamine circuit.

Chronic pain induced by nerve damage due to trauma or invasion of cancer to the bone elicits severe ongoing pain as well as hyperalgesia and allodynia likely reflecting adaptive changes within central circuits that amplify nociceptive signals.

The present study explored the possible contribution of the mesolimbic dopaminergic circuit in promoting allodynia related to neuropathic and cancer pain.

Mice with ligation of the sciatic nerve or treated with intrafemoral osteosarcoma cells showed allodynia to a thermal stimulus applied to the paw on the injured side.

We used tyrosine hydroxylase (TH)-cre mice that were microinjected with adeno-associated virus (AAV) to express channelrhodopsin-2 (ChR2) to allow optogenetic stimulation of VTA dopaminergic neurons in the VTA or in their N.Acc. terminals.

Optogenetic activation of these cells produced a significant but transient anti-allodynic effect in nerve injured or tumor-bearing mice without increasing response thresholds to thermal stimulation in sham-operated animals.

Suppressed activity of mesolimbic dopaminergic neurons is likely to contribute to decreased inhibition of N.Acc. output neurons and to neuropathic or cancer pain-induced allodynia suggesting strategies for modulation of pathological pain states.

this 2020 paper is about antipsychotic drugs for non psychiatric illnesses. Some alternatives to Aripiprazole may be possible...
For each drug, there is a short paragraph about effect on brain Dopamine... 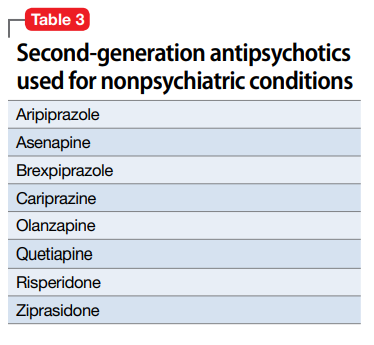 The first four are all third generation antipsychotics. The last two are not available as licensed drugs.
Click to expand...

Abstract
..... In this study, we aimed to compare the integrity of the monoaminergic white matter fibre tracts projecting from brainstem nuclei in a group of patients with MS (n = 68) and healthy controls (n = 34), and to investigate its association with fatigue.

Fibre tracts integrity was assessed with the novel fixel-based analysis that simultaneously estimates axonal density, by means of ‘fibre density’, and white matter atrophy, by means of fibre ‘cross section’.

We focused on ventral tegmental area, locus coeruleus, and raphe nuclei as the main source of dopaminergic, noradrenergic, and serotoninergic fibres within the brainstem, respectively.

Fourteen tracts of interest projecting from these brainstem nuclei were reconstructed using diffusion tractography, and compared by means of the product of fibre-density and cross-section (FDC).

Fixel-based analysis revealed significant axonal damage – as measured by FDC reduction – within selective monoaminergic fibre-tracts projecting from brainstem nuclei in MS patients, in comparison to healthy controls; particularly within the dopaminergic-mesolimbic pathway, the noradrenergic-projections to prefrontal cortex, and serotoninergic-projections to cerebellum.

Moreover, we observed significant correlations between severity of cognitive fatigue and axonal damage within the mesocorticolimbic tracts projecting from ventral tegmental area, as well as within the locus coeruleus projections to prefrontal cortex, suggesting a potential contribution of dopaminergic and noradrenergic pathways to central fatigue in MS.

Our findings support the hypothesis that axonal damage along monoaminergic pathways contributes to the reduction/dysfunction of monoamines in MS and add new information on the mechanisms by which monoaminergic systems contribute to MS pathogenesis and fatigue.

This supports the need for further research into monoamines as therapeutic targets aiming to combat and alleviate fatigue in MS.
Click to expand...

There is increasing recognition of the involvement of the nigrostriatal and mesolimbic dopamine systems in the modulation of chronic pain.

The first part of the present article reviews the evidence indicating that dopamine exerts analgesic effects during persistent pain by stimulating the D2 receptors in the dorsal striatum and nucleus accumbens (NAc).

Dopaminergic neurotransmission in the mesostriatal pathways is hampered in chronic pain states and this alteration maintains and exacerbates pain.

The second part of this article focuses on the glutamatergic inputs from the medial prefrontal cortex to the NAc, their activity changes in chronic pain, and their role in pain modulation.

Finally, interactions between dopaminergic and glutamatergic inputs to the D2-MSN are considered in the context of persistent pain.

Studies using novel techniques indicate that pain is regulated oppositely by two independent dopaminergic circuits linking separate parts of the ventral tegmental area and of the NAc, which also interact with distinct regions of the medial prefrontal cortex.
Click to expand... 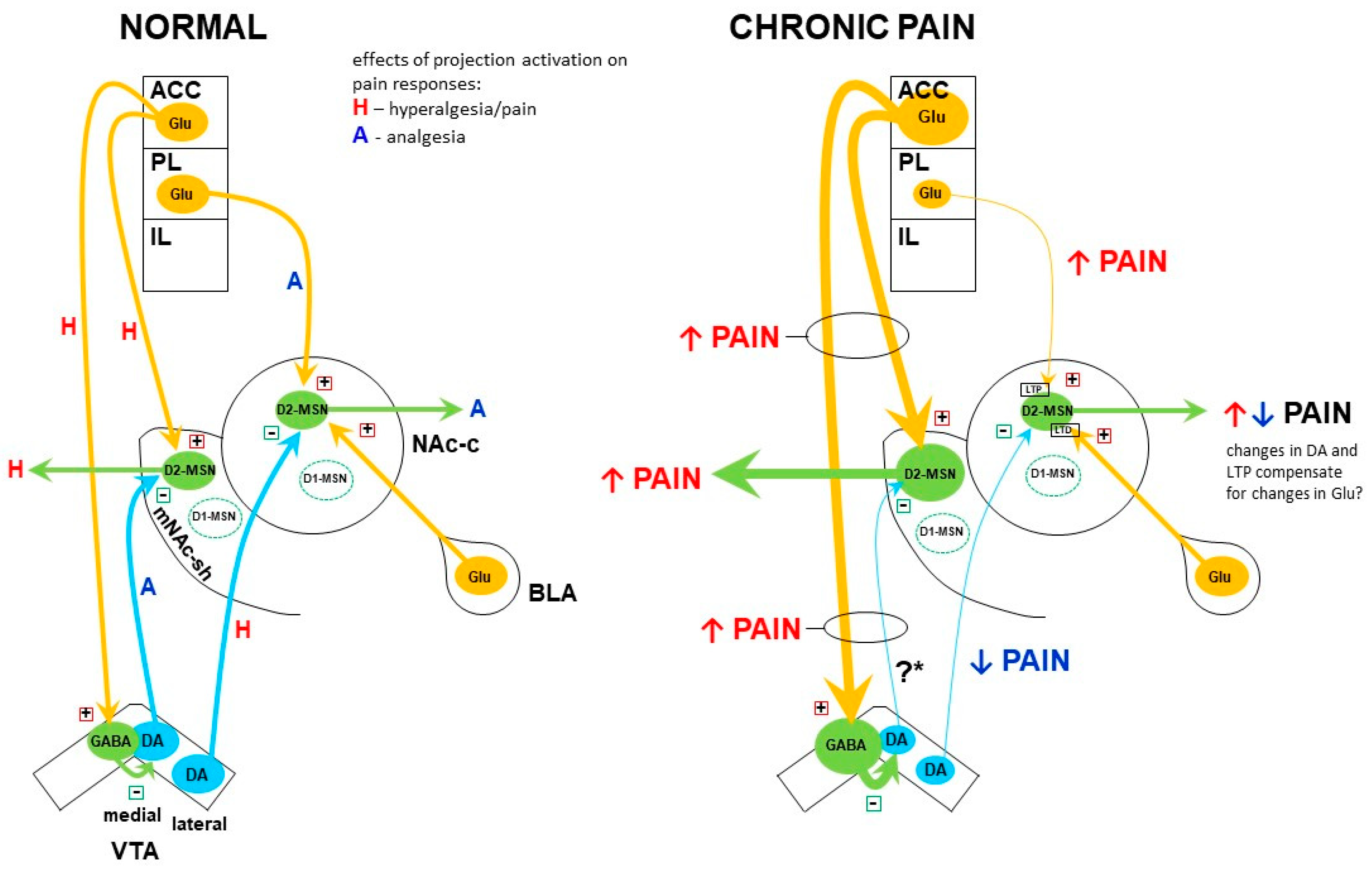 Figure 1.
Click to expand...
Interactions between the Ventral Mesostriatal Dopaminergic Pathway and Corticostriatal Glutamatergic Afferents in Chronic Pain. The scheme presents only those neuronal connections, whose participation in pain processing and involvement in chronic pain have been documented directly.

Left panel. “A” and “H” placed along projections denote effects of activation of the particular projection on pain responses: analgesia and hyperalgesia/pain, respectively. These signs reflect effects on both sensory and affective aspects of pain, or either (see text for details), and show general tendencies, some of which become explicit only under tonic or chronic pain.

Right panel. Changes in the activity of particular neuronal populations and their projections under chronic pain have been reflected by the “cell body” size and the arrow width. ↑ and ↓ arrows denote the final effect on pain (increase and decrease, respectively) resulting from both the function of a particular projection in pain modulation (refer to “A” and “H” on the left panel) and changes in the activity of this projection in chronic pain.

?*–In contrast to some other studies, Ren et al. [67] provide evidence of an increase in dopaminergic neurotransmission in the medial VTA–medial NAc shell projection in chronic pain. This scheme has been based on the studies by Schwartz et al. [89], Lee et al. [81], Ren et al. [63,67], and Gao et al. [85]. The nigrostriatal dopamine pathway has not been included in the figure due to the lack of corresponding studies on the dorsal striatum.