Anyone treated for MARCoNS?

Has anyone been treated for MARCoNS? Did you notice improvements in symptoms e.g. chemical sensitivities?

Bumping this thread instead of starting another one.

I just received a positive MARCoNS test result. It actually quite surprised me, since I did the nasal swab myself, and after mailing the sample, I realized that I didn't get the swab anywhere near deep enough. But the test was positive nonetheless. (I suspect that with a deeper swab, it might have been more than just the "small amount" reported.) 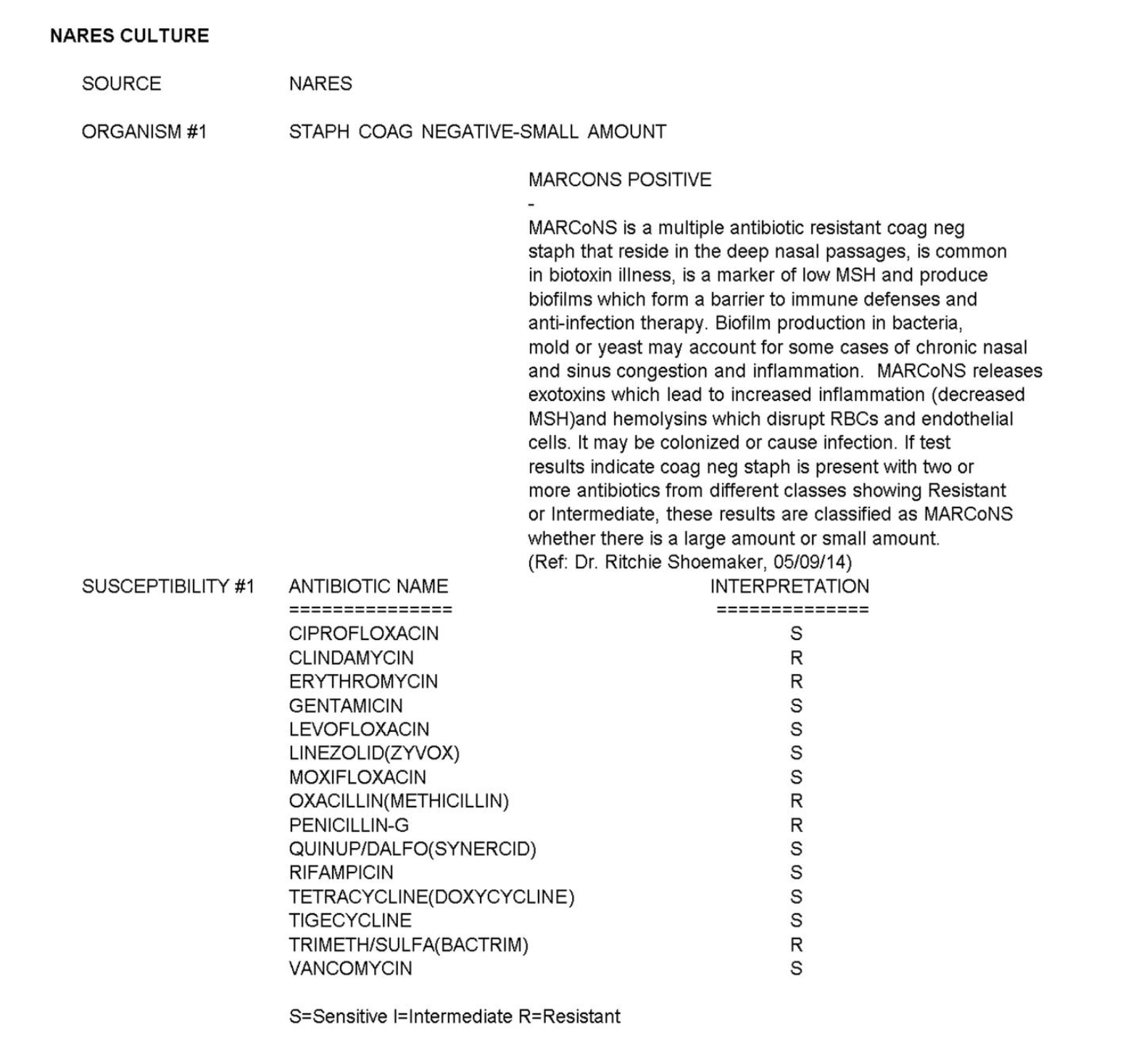 I'm uncertain what to do with these results, and if they have any clinical significance for me.

My other mold-related labs are not quite "normal", but also not sky high or anything:

Urine mycotoxin testing: in the past has shown all mycotoxins (RealTime Lab), but most recently, Great Plains Lab only showed Ochratoxin A (15.53 ng/g)

I don't remember ever having a reaction to a moldy or water-damaged building. I've been sick for decades and moved dozens of times, but I suppose there's always a chance that I was exposed in the past and am still dealing with symptoms?

To be honest this whole hypothesis doesn't hold much weight for me. But I'm willing to consider anything.

I'm wondering the same thing as the original poster... has anyone treated MARCoNS and had a reduction of symptoms?

I dont think this would help honestly, but have you camped outdoors for a few days? If you are able all the mold people say you shoild see improvement if its an issue. Bur like you said you dont seem to react. Just somethhing i woild test if able to.

Thanks for the suggestion Ben. I've done a lot of camping over the years, especially when my symptoms were more mild. Indoors, outdoors... never seemed to make a difference. I don't seem to "react" to anything, I'm just... really... f'in.. tired...

No problem! I didnt thinknit woild help but at least you know.

@5vforest , Not sure if you've found help for marcons by now but holding zinc acetate in the mouth like George Eby describes and uses in his cold cure product causes zinc ions to travel up the surface of the throat into the sinus and coats the area with zinc ions. Other forms of zinc don't work since they don't produce nearly the same amount of ions, and avoid putting it directly in the nose because it can cause permanent loss of smell. Neti with saline and possibly adding a popular brand of grapefruit seed extract that has an antifungal preservative, done like aryuveda or yoga in the nose and out the mouth and can tilt head to reach the marcon area. Also nasal spray with 0.25% food grade hydrogen peroxide preserving it can hit the target area, as can inhaling vaporized essential oils of myrrh (mold doctor uses myrrh to raise alpha MSH) or frankincense or other antifungal or immunomodifiers may help. The vapor reaches the target area. Sorry mostly small number of anecdotes that mostly were used for purposes besides MARCoNS, but these are methods of getting substances directly to the marcon area fairly easily. I think it's a patch until it's understood why marcons form, such as is there a primary problem that alters the immune system a bit?
Last edited: Apr 9, 2021
You must log in or register to reply here.
Share: Facebook Twitter Reddit Pinterest Tumblr WhatsApp Email Link