What I Do For Exercise Intolerance - Fasting Rash, and This and That...

I've had almost two weeks of 'remission' -- not 100% but my window of activity and energy is enough to get in some exercise and I decided to start training for a Sweet Heart 5K fun run February 10th (fun runs allow walking and are non-competitive, a 5K distance is a little over 3 miles). I'm trying to train a little everyday using a chart from Darebee that has me walking, jogging a bit, walking. I'm on day 8, huzzah! For the last three months I haven't had very many good days and any exercise has been slow walking at best.

I have a very cheapo treadmill in my garage that I'm walking and jogging on that I purchased last year. I have a gym membership but haven't worked up to that yet. I would like to go but I would have to drive and I just don't quite have the oomph yet. They have a nice elliptical there I want to use because I like the non-impact stuff. They have a pool if I ever work up to that.

So anyway, I have a lot of problems with PEM ( post exercise malaise ) and what it is basically you work out and then feel like you've been hit by a truck or attacked by a vampire or contracted a tropical parasite or otherwise -- really stinking bad. Mine always has a side bonus of insomnia too. And mine can last 3 or more days and send me into a really bad week where I'm lucky if I have the energy for a shower.

Last year I tried something that worked really well for me and allowed me to work out and make some headway, but I freaked out and abandoned it to my detriment. To be frank I have an eating disorder. After being sick for so long I just got to where everything I put into my mouth freaked me out and if you have a paranoia about food -- oh YouTube can fuel that to infinity. I can't seem to really stop my obsessive reading, studying and memorizing food factoids. So last year I was super paranoid about anything with sugar in it and I stopped using my sport drink during exercise and that really set off about three months of down time for me where my joints swelled, I had constant fatigue, I went weeks without so much as a walk and hurt non-stop.

But I've worked out daily now for two weeks about so I have to admit that it actually works but I still struggle. I actually freaked out enough that I took my blood sugar levels after I worked out and drank my sport drink to make sure I was okay. I don't have diabetes and have never in my life have had high blood sugar but I was so freaked about drinking something with sugar in it that I checked it anyway, 90.

So my routine is:
Drink Vega Energizer pre-workout or during Yoga (*contains caffeine, they have non-caffeine versions too)
Exercise and finish the Vega or start on the Post Exercise Drink
(When I can't afford Vega I use ye old Gatoraid, anything sweet would probably work.) 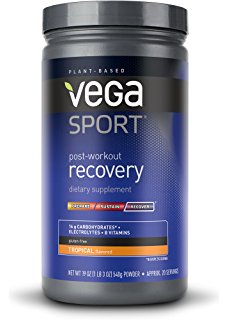 Supplements with shake: L-Glutamine, BCAA, Magnesium
**plant protein shakes don't work for me, I don't break down the plant protein into amino acids so within three days I'm just not recovering and I'm not building muscle**

As long as I stick to my workout drink and post workout shake I'm sound as a pound. No PEM, no insomnia, no problems with building muscle and recovery.

So with my eating disorder is this OCD need to watch, read and obsess about food to the point I should have earned a Ph.D by now -- if any of it would hold water. I've studied everything Dr. McDougal, Dr. Barnard ever said but also Dr. Jason Fung and Gary Taubes - and I can even say things like some of McDougal's ideas and quotes he took from Pritikin and recognize charts and studies that both sides quote and get quite the chuckle when they try to prove stuff from World War II (I could go into why.... but don't get me started).

The OCD is so bad that I've re-watched the same documentaries over and over and have some favorites. I have some classic books long out of publication from the great Jean Mayer.

The OCD is fueled by a really ever present blaming of people for their own health issues -- "if you just ate right you could be well" -- that's the insinuation, and sometimes it's not subtle it's a big bold headline of blaming the ill. So if you've ever felt terrible like you're ill because if you had just done xyz differently ((BIG OLD HUGS)).

And I always feel like if I had just been a little more strict, had more self-control.... maybe I would be well.

So I've spent years researching, studying, pondering, making notes, watching documentaries and it never goes anywhere. I might as well researched Astrology and put my faith in the conjunction of Mars and Venus (my Mom in the 80's was an Astrologer *grin*).

But it got me into fasting. And fasting for women can be dangerous because it can really screw up your hormones and your thyroid, although some sources say it's fine and dandy and no harm can come of it...etc. etc. And I actually read some books from the 1800's on it even citing the great Dr. Hazard (who was a female serial killer really into fasting...)

I felt better, I felt a lot better. So if going from 6pm - 1pm the next day was good - a full four day fast would be better right?! Haha

I only made it 24 hours before I broke down and ate. I did take electrolytes during and felt fine. I had tons of energy the next day but was a little itchy...

No signs of fatigue but I developed something they like to call, "Keto Rash" and it's a full body rash that is unbelievable in its level of SUCK and it often takes antibiotics to clear it. I started eating 'normally' (well for me anyway) again but my whole body is covered with this d**** rash.

So yeah - there is that. It has been ten days or so now I guess with the rash. It's hard to sleep, it's hard not to yell at people, it's miserable. I have big purple bruises from scratching, sores, rash bumps -- it's terrible. I've always had nice skin up until now.

Online I was surrounded by people who made my eating OCD not only seem normal but also mild. Like a friend of mine who will eat zero fruits or vegetables (the sugar!!!), or the person I know who only eats real food a few days a month otherwise liquids (and they have no health issues for doing so, they just do it), or the guy who only eats raw stuff. And over the years I've seen a lot of runners cut down by this, "I don't know why you think I don't eat, I had 1500 calories in raw broccoli today - that's plenty of food!" Sooner or later usually the body gives out when you under feed and expect it to run marathons.

And the more extreme you are ("I eat 2lbs of sweet potato per day and drink squash juice!") the more people give you accolades, thumbs ups and say you're doing great.

I can't count the number of times people would post photos of anemic little plates of food that were absolutely sad, 1/2 cup of boiled broccoli (because 1 cup would be too much) and barely a chicken tender - devoid of any seasoning -- and be praised.

I have two teenage kids, I started watching how they copied me and really started feeling -- hey I don't want them copying my food habits, no way, no how. And that started ending the OCD spell for me, or at least I FINALLY acknowledged it. But it's a challenge.

I do like to cook, love to bake and I'm pretty good at cooking so am using a meal plan now that is not 'diet' and not restrictive to cook normal meals because I don't have the area code to those anymore. Through eMeals I get the "classic" meal plan and cook for my family. I sometimes even eat it.

Anyway - yeah, I didn't plan to write about that. But that's my confession I guess. Trying to do a lot better with self-care this year. I found a YouTube series called, Yoga with Adriene, and I love it. I'm doing the 30 day series. I can't do all the poses or anything but it's very relaxing and forgiving. It doesn't expect you to be flexible or in shape.

This year I'm all about the self-love and self-care and trying to work with my body and understand what it's telling me, rash and all.

Sending out a lot of light and love to you all fighting the good fight. We all have stories don't we? Even with the fatigue I know you all are climbing those proverbial mountains and overcoming so much and you rock.

--Paula From The Woods

Hi Paula, You are so brave! I hope your careful. So Happy for you getting to run again and you sound so well and excited.

I wanted to mention to you since you did mention it quickly. I read and was told by my doctor that Aqua aerobics is the best excerscise for ME. For some reason it kicks our immunity system back into a state of strength! It is a low /nonimpact way to excersise.

When I was on vacation, I was in their pool and they started doing aerobics, we had different devices for arms or legs etc and we worked for an hour!! I thought for sure I was going to be wiped out, i wasn't, I felt good! So I did it each day for 7 or 8 days and loved it!

The difficult part for me and maybe for you is driving to the pool. I found a place right up the road from my house but have not gone yet. I want to, they do yoga and aerobics classes everyday..!!

I do wish you all the best in your adventure and hope you will reach your goal without any ill effect from ME. I just wanted to share the pool effect.

Please forgive any spelling errors I have made...LOL I'm typing without my glasses and I can't see a thing...lol.

All the best to you Paula...<3 : )
Pen2 -- BIG HUGS -- thank you for your kind words. I will check into the pool aerobics / yoga - see what they offer. I know they do some classes. But yup, just driving is the hardest part for me. Lots of love, thank you for the kindness. (And I would never proof read anyone for grammar or spelling - my worst area! haha)
You must log in or register to reply here.