Visiting My Mother (obstacles and orientation)

He exited I-10 instead of going straight, which put us on the outer fringes of Tempe, instead of Ahwatukee. No, it wasn't a fatal error, but there would be several more "errors" to come. Upon entering the chosen apartment complex (15 minutes later) the driver angled to the right instead of turning left. Thus, we took the scenic tour (in search of building number 23). Very very scenic. 17 speed bumps in all. Yes, we saw them and mostly felt them all. Luckily I have some form of miniature shock absorbers on my power chair.

And it turns out the apartment building we were seeking out was located right at the front gate entryway. And then when we finally got there taking the circuitous route, the rider canceled out, no longer needing transportation. So that was the end of that. I was still riding alone.

Next we headed towards Mesa. The driver originally stated that we were picking up an additional rider at his home (to unceremoniously drop off at the grocery store). Somehow, 20 minutes later, we ended up at the grocery store first, before my driver realized his mistake. So that took another 25 minutes to backtrack, pick up the disabled fellow and his grocery shopping cart, and then head back to the grocery store.

And then one last time my driver inadvertently got spun around somewhere near Baseline. Or Broadmoor. Really, I don't know where we were half the time.

Finally the driver explained why he was having these great and obvious difficulties. It was due to our extensive and in depth conversation. Apparently I was distracting him. But he asked for it by being exceedingly conversational. So at that point, I feigned sleepiness and shut the hell up!

Along the way, my mother called me a couple of times asking how much longer it would be before I arrived. So I should probably provide a timeline of sorts.

My pickup time was scheduled for 11:00 a.m. I figured my travel time would place me at my mother's residence somewhere around 12:30 or so. Instead, I didn't arrive at my mother's apartment until 2:15 p.m. That's right! I was stuck in transportation hell!

In that amount of travel time, I could have gone to the bottom of the Grand Canyon (the hard way). Visited Algadones, Mexico (just outside of Yuma). Or Las Vegas, Nevada. Las Vegas, New Mexico? Nope. Too far away. But not by much. Or I could have flown all the way to Chicago!

It was nice to see my mother, as she seemed fairly happy about the whole visitation matter.

But the first order of business was urination. I'd been "holding it" for an hour and a half. And you know how that goes, don't you? I really really had to go. So it was a matter of navigating along a winding sidewalk pathway, then wedging myself into an undersized elevator, followed by an automatic button activated door, and then into my mom's apartment. Tight squeezes one and all.

Mostly my mom kept asking me if I needed anything. Like food. Books to read. Crossword puzzles. A blanket. You know, typical things mother's try to foist upon their adult children. Of course, I didn't bite. Well, the food, that is. Because you know, I can't eat. But the other stuff, I had to remind her that I did not need supplemental forms of entertainment or comforting effects.

It seems as though her apartment was in pretty good shape, except for the vent up above. Filthy, dirty, dusty and black. Which is okay, if you're running the third leg of a motocross heat at Caesar's Palace.

We were only able to spend just over an hour together, as my return trip was scheduled for 3:30. But having that seen her since 2018, made everything alright.

So she gave me a few hugs and a few kisses on the cheek, and she also touched my left hand several times. And I was okay with that. She seemed undistracted and genuinely happy to see me.

I was also able to broach other subject matter, although she proved defiant as heck. Basically, she doesn't want anybody coming over to helping her. Anybody visiting her. Anybody checking in and checking up on her. But I think possibly, I was successful in convincing her otherwise. We shall find out soon enough.

Return to the Home of Nursing

The ride back wasn't as trying. An hour and a half on the road is a breeze compared to the other never-ending adventure in the opposite direction. This time, the driver went on and on about the para-transit company history (an entity based out of Paris, France), his lawsuit against Dial-a-Ride, and other such details regarding his duties as a para-transit driver.

So with his stiff Iranian accent he went on and on until finally we picked up another passenger at a hospital. And she was one of the ones who rode with me the last time, on my way back from the Valley Metro Transit qualifying test. She was the one with nearly the same birthday as mine. The one who lives in the same apartment that I used to live in with my mother and son (well over a decade ago).

As he lifted her aboard it became immediately apparent that she was watching a football game. Out loud. Without headphones. And she continued watching the football game out loud all the way home from Mesa to North Phoenix. That's 30 f****** miles of second hand fevered football action all because she didn't have any earbuds!

In any case, I put some earplugs in, donned my sunglasses, and played dead the rest of the way back. The Iranian driver took the hint, and focused on the task at hand. And Little Miss Meatball (behind me) continued watching and listening to the obnoxious sporting event. Well, she wasn't shaped like a meatball... more like a kumquat.

And then I got back. Luckily I'd dozed off somewhere along Squaw Peak Parkway, for maybe 10 minutes or so.


*You needn't read the rest of this. Nope, the rest of this is self-indulgent, self-centered, self-focused, and having much to do with my recent state, the reasons why, and what I hope to accomplish or achieve without the assistance of anybody assisting, by means of necessarily direct intimate communications -

AND I CAN'T SEEM TO DEACTIVATE CAPS LOCK.


Alright. The bottom line is that my mother was rather excited to see me. And it was nice seeing her in return. And I plan on going back to visit her semi-regularly as soon as I put together some kind of workflow / cash flow. My older sister said she would fund my trips, it's just a matter of figuring out how to best execute the plan… fill out the documentation, etc. 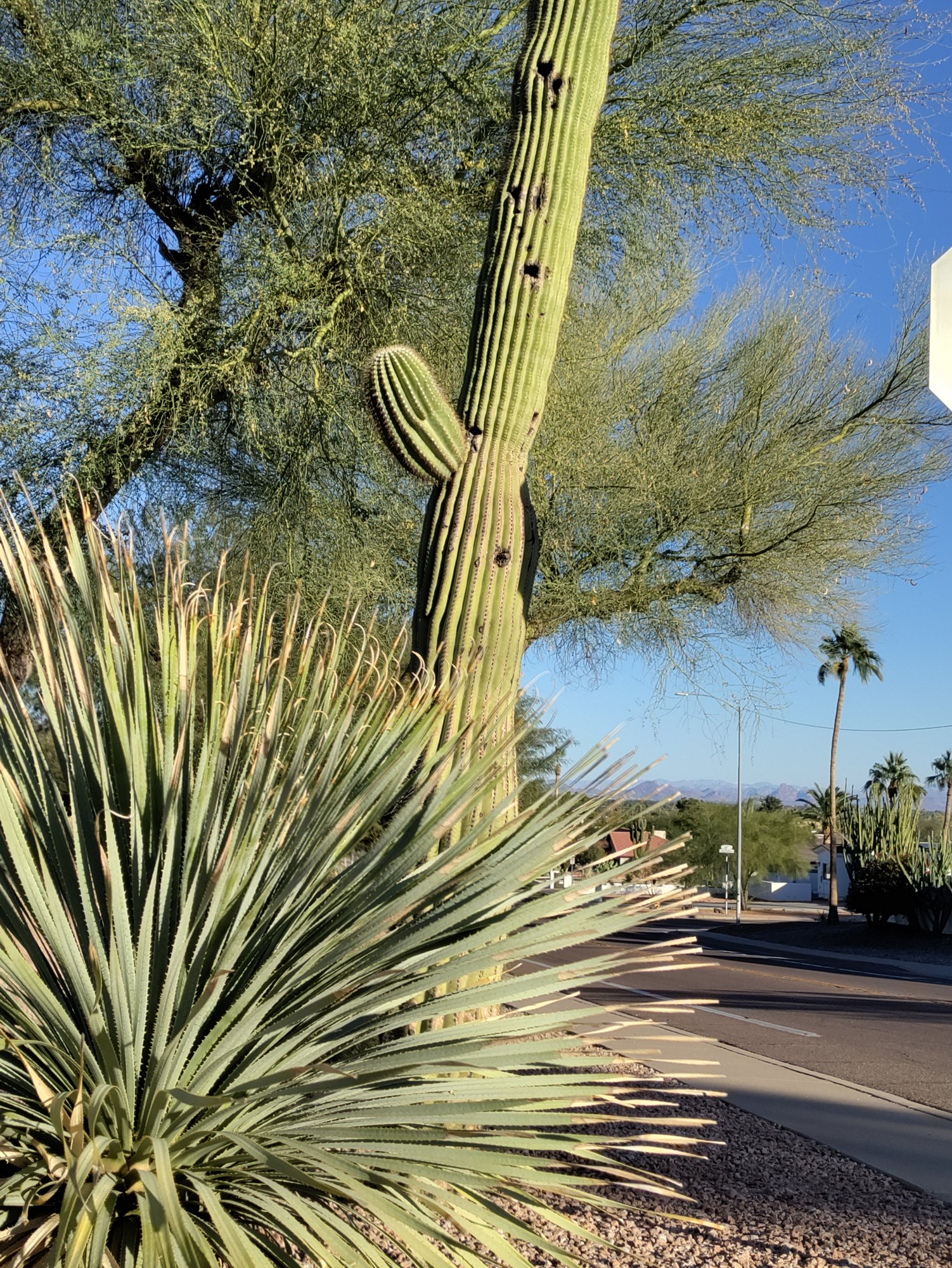 Hi @Howard......I'm so pleased that you were able to see your mother. Sorry the trek out was so arduous. It sounds to me like the fellow didn't have a clue about what he was doing, or where he was going. You both saw parts of Phoenix that you hadn't seen before.

Now you know why I'm so fond of football. I really can't stand the broadcasters niuseand then put having to keep 8 children quiet in a very small house. Not much fun, I can assure you. Yes, the broadcasters sound the same today as they did probably 70 years or more ago. That **** noise!!

We had to contend with the World Cup Soccer....our youngest daughter. It followed her wherever she went. She's the sports nut in this family. My husband played, as did she, but neither was interested in watching it played on TV when they could play the game themselves. I don't think Rod cared too much but our not-so-young daughter did. She coaches her daughter's soccer games, that's how wrapped up in any sport she becomes. Our granddaughter doesn't take after her mother one little bit. I guess it evens out somewhere.

We have our house back. Everyone departed yesterday and I'm glad I brought them up so well. Freshly made beds, washed sheets and towels and Rod said the upstairs looked pretty good. I can't climb stairs so will have to take his word for it. We'll see them again for 3 days at Xmas.

Exciting, I know, but our lives are exciting, aren't they? By the way, does the cactus have holes because of bullets, or does this happen to them naturally? I often used to wonder about that. Glad you had your outing. Hope it gets easier with time. Yours, Lenora
Hi, @Howard!

I was hoping you would write a post about your visit. Thank you for sharing.

I wanted to let you know that (happy!) tears spilled out of my eyes when I read this:

So she gave me a few hugs and a few kisses on the cheek, and she also touched my left hand several times. And I was okay with that. She seemed undistracted and genuinely happy to see me.

Prior to 2019, my mom was still ambulatory, and still able to drive short distances, and she would visit me in my apartment about once a week.

In order for us both to fit on my tiny sofa, she would sit on one side of the sofa, and I would lie down across the length of the sofa with my feet in her lap. She would simply hold my stockinged feet and give them a loving squeeze now and then as we chatted or quietly rested together.

I can't say this is a form of visiting that I would have enjoyed prior to contracting ME/CFS, but it meant the world to me as I think it's a type of physical affection that is unique to mothers (or partners with foot fetishes). Ha!

Anywho, you sharing the details of your visit with your mom prompted my own strange and happy memories of getting my achy, boney feet squeezed by my super sweet mom.

Thank you for that, Howard.
I'm so glad you got to see your Mom again.
Zebra said:
In order for us both to fit on my tiny sofa, she would sit on one side of the sofa, and I would lie down across the length of the sofa with my feet in her lap. She would simply hold my stockinged feet and give them a loving squeeze now and then as we chatted or quietly rested together.
Click to expand...
Coincidentally, that's almost exactly what my mother did for me when she used to come visit a few years back. She sat at the end of the bed and I would just ask her to touch my feet. Squeeze my toes. Something like that.

Of course, that was back when I was in a lot worse shape. Touching my feet didn't cause sensory overload, or physical duress. Plus, I enjoyed the contact. The touch. The acknowledgment that I was in a live human being, mostly.

But yes, my mother was visibly emotional while spending time with me. Which of course, is quite unusual for her.

Hopefully you can get up and around soon. Or at least, sooner than later!
lenora said:
By the way, does the cactus have holes because of bullets, or does this happen to them naturally? I often used to wonder about that.
Click to expand...
Birds. The Cactus Wren? I think there are a few who live in the saguaro's. It's a relatively safe place, considering the protruding needles.

Shooting saguaro cacti here is highly illegal, so fortunately no one really does it. Heavy fines. Jail time. Stuff like that. The one in the picture is probably 80 years old. Or maybe older than that. Probably 12 ft tall.
You must log in or register to reply here.