Trusting the Numbers 5: Why tracking my heart rate isn’t enough

Measuring my heart rate does at least two things for me.
The morning heart rate is really important. Our moment-to-moment heart rate isn’t enough; keeping the heart rate under the AT isn’t enough. The AT isn’t a magic number above which everything falls apart, and under which everything is safe. One researcher tells the story of a woman who learned her AT through the 2-day cardiopulmonary exercise test, then proceeded to take slow daily walks, careful to keep herself under her AT. A year later she re-did the test, and to her surprise, her AT had fallen 15%. Her “safe” exercise had done her significant harm. (When I find the energy I will provide a link.)

Here is a graph of my own morning heart rate, from the beginning. Even with all the ups and downs, you can see the major movements in my heart rate as marked here. 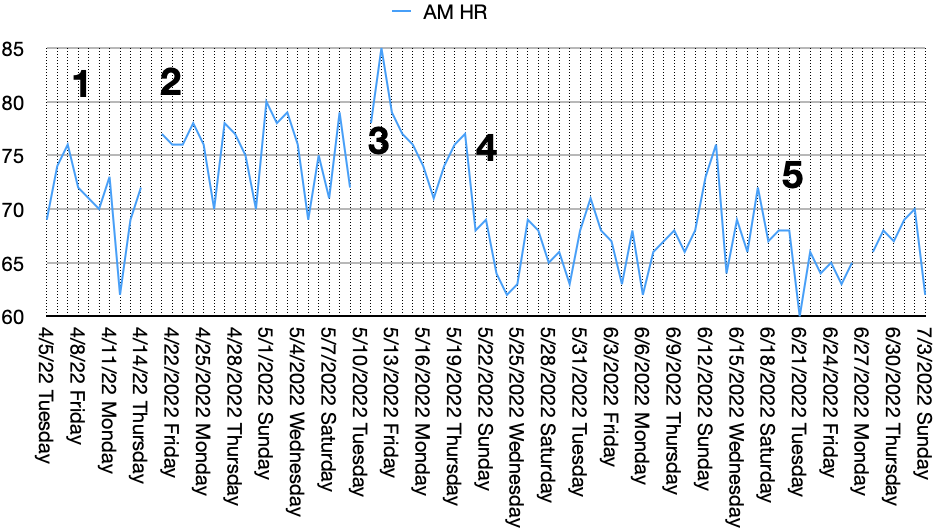 What do I make of all this? Well, for one thing, this is not a healthy graph. A normal person’s heart rate does not jump around like this. And even though I’m not well, I should be able to achieve a more consistent morning heart rate.

Once my heart rate becomes more consistent, I hope that changes in my heart rate will be easier to decipher—but for now, I find my graph pretty confusing.

For more insight, I turn to my heart rate variability numbers.

Heart rate variability (HRV) is a measure of how much your heart rate varies from moment to moment, and from minute to minute. HRV can be used for a number of things, including helping athletes know whether they're recovering well from exertion—so we use it for a similar purpose. The mathematics of figuring this out is pretty complex, but your phone takes care of that part. My husband (an engineer) worked out for me what all the different numbers refer to, but even he can’t remember, from day to day, what each of the numbers means.

Fortunately, I don’t have to remember where the numbers come from. I just have to figure out which numbers, or which combination of numbers, give me the most insight into my condition. RMSSD? PNN50? LF power? HF power? Total power? SDNN? CV? LF peak? HF peak? The overall "HRV" number that an app gives? I’ve been tracking all of these numbers, and they’re all becoming more stable, which is encouraging. But they are not all equally helpful in tracking my condition.

For me, for now, the one HRV measurement that I wouldn’t want to do without is the LF/HF ratio. It’s complicated to explain how this is calculated, and impossible to say what it actually represents (because it's not clear what contributes to the LF variations); it's not even clear yet whether it's a helpful number for the general population. The simple explanation is that the LF/HF shows the balance between the action of the sympathetic and the parasympathetic nervous system, and that’s how it’s generally presented, but that is an oversimplification at best.

But I don’t need to know what causes it, because what I do know is that my LF/HF ratio tends to jump out of its good range before my other numbers indicate trouble. Paying attention to my LF/HF ratio often gives me warning a full day before I would otherwise have it! And more than that, I find the ups and downs of it easier to follow than my heart rate graphs, since its changes can be so dramatic.

(Notice: This is what is true for me, right now. If I’ve learned anything from the online community of people with ME/CFS, it’s that things vary from person to person, and that reactions change over time. Other people haven’t found this ratio at all helpful.)

Here’s a graph of my LF/HF ratio. Gaps in the chart come from technical difficulties. 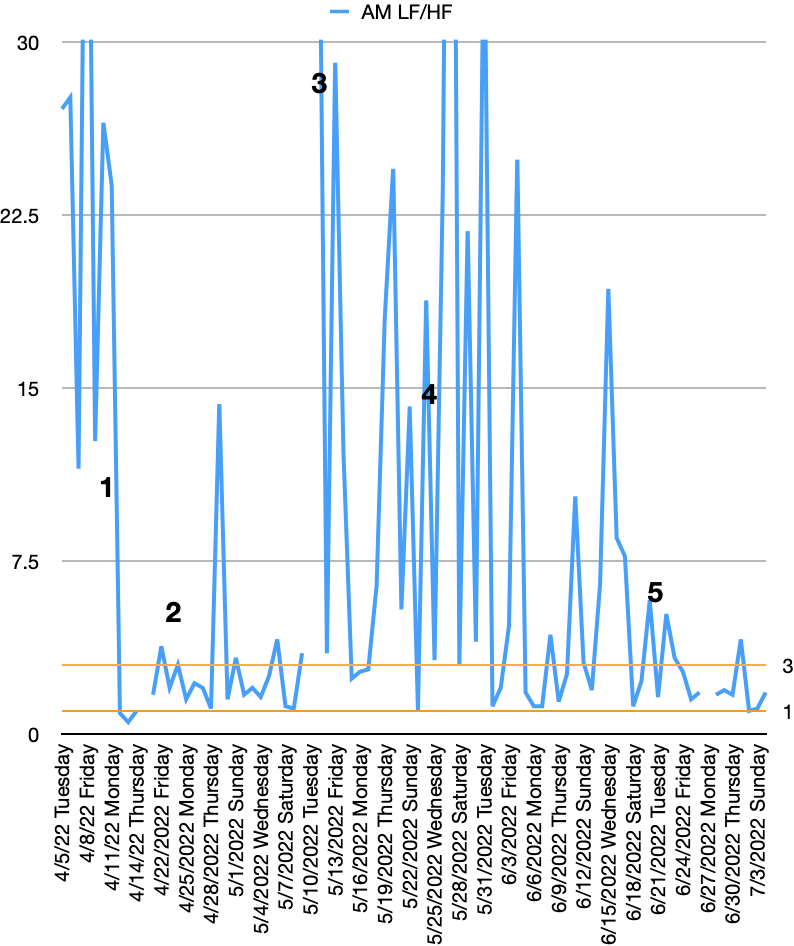 See the orange lines near the bottom? When my ratio is around there, all my numbers are more stable, and I feel better.

Look especially at point 3, on both charts. On May 10, after a period of relative stability, I overexerted myself in an extreme way (doing the lean test). On May 11, this shows up on my ratio chart as an extreme value. My heart rate graph shows no obvious effect until the 12th (the big peak). It then returns quickly to its former levels, before dropping again when I start a beta blocker. Looking only at my heart rate, I’d have concluded that I had recovered pretty well from the overexertion.

But look at my LF/HF ratio during that period! It bounces up and down for a full month before settling down. On both charts you can see that in early June my numbers start to settle down—but then I overexert again. And again, the LF/HF ratio shows the problem a full 24 hours before the morning heart rate does.

My ratio has consistently shown me that I've overdone, 24 hours before my morning heart rate has. That 24 hours matters. If I overexert myself on Monday and don’t realize it until Wednesday, then on Tuesday I will unknowingly deepen my troubles. If I have warning on Tuesday, I can set that day aside as a rest day, and minimize the troubles.

Of course, I don’t trust only that number. I generally trust whatever number is showing troubles, and I try to look at the big picture—including my own symptoms. It’s just that up to now, the LF/HF number has generally been the first to show trouble, and the last to settle down again. (Not always, though—notice that between points 2 and 3 my LF/HF ratio was pretty consistent and my heart rate was still crazy, though improved from before point 2.)

this is very interesting data and you analysis is fascinating...

I'm going to be doing a lean test soon, myself. (actually do it right and don't take my normal BP pill)
The terrible thing is that I just did it by myself, alone—not with a doctor or something. I didn't make it to the three-minute mark, and I nearly fainted (a first for me). It was awful.
You must log in or register to reply here.