I thought I'd try out anti-inflammatory herbs as a regular thing.
I still have no firm diagnosis, but the herbs are worth a shot.

It is the most strange sensation, but all the way through this past 6 months, from DAY ONE, there has been an odd feeling that the smallest simplest little thing was all I needed to feel okay!
I experimented with blood sugar levels....fluid intake (it felt that simple) They didn't help. Researching, cutting out gluten, not drinking coffee....et al
All those things didn't help either
Then one day -weirdly -something did. I felt queasy, head/eye pain, shaky with a deep internal tremor, great "unease", restless, weak and exhausted, and generally horrid. I couldn't keep still with this most unpleasant feeling so walked gently in the garden.
I snapped off a sprig of Rosemary and just started chewing at it. Desperation to just try to find anything that might help. I had tried chewing most edible or non-toxic herbs (Dandelion,. Nasturtium, Lavender leaves, Mint, Cleavers) at that point which made no difference, but hadn't tried Rosemary..
Nothing much happened.
Then 15 minutes later .....I suddenly felt quite a bit of relief gradually come over me!

Okay -a fluke I thought. Anyway, the effect didn't last....maybe for a couple of hours.

So the next funny turn I had, I tried it again -and again there was a response from my body.

I couldn't quite recall all the properties of Rosemary, so checked again in an old trustworthy herbal book I have on the bookshelf upstairs.
There was absolutely no mention of Rosemary being useful for any of the specific symptoms. But it was listed as having "anti-inflammatory" action.

I also did note that it is sometimes used in cases of anxiety.

Now I happen to know that in my case at least "anxiety" is NOT the core issue. The core issue is some physical change which has re-set my whole system and put tremendous strain on it.

In my case, I believe it was an infectious agent (I suspect either H1N1 or an enterovirus, because of the initial sudden flu-like illness.... but not EBV or Lyme) On top of a slightly stressed system. (I worked too hard for my body frame and age, and had just come through the bitterest coldest winter with ice and snow late in March. My life is tough and over the years being fit and well I adapt to it. But maybe at 65, keeping on like I was still 30 doesn't work so well?
Something must have blown a fuse. Either my immune system couldn't mount a healthy response to an infectious (viral) agent....or inflammatory cytokines got out of control....I don't know, and can't really diagnose myself, but am alone with this since the doctor says all my results are great, so have to figure out something I think.

Nevertheless, "anxiety" is certainly an element worthy of consideration.
I am not anxious about any particular thing and do not generally have an anxious temperament. I don't have history of anxiety or depression.
But there is an "anxiety" module to this illness. I have to admit. There is also a "sad" aspect to it. I will not call that a "clinical depressive" aspect. Just sad, with some obvious sorrow about a life I knew and a robust health which has now apparently gone.

Let's face it -I don't give a damn what label my illness has or hasn't got. All I want is to feel like my normal (even aging) Self!!

Okay so I got a little list together.
These herbs are very "homely" ones. I usually use herbs I can either find myself, or buy easily at the herb store in town. There are bound to be others I have not included.

I am a little wary of Turmeric as I have no experience of it but have heard it can sometimes cause constipation. I wouldn't like that. But I shall graduate to it probably (start low and go slow)

Well I haven't got all these herbs but thought I would quickly try a combination of those which are gentle and safe (for me) and easily available. So I mixed this:

The tea tastes lovely. It is even nicer when cooled in the refrigerator. Such a nice tasty refreshing drink with a slight spicy lemony tang!

I made up a pint of this and have had wine-glass portions over two days. I bear in mind I have no allergies to these (tried and tested) and no previous bad reactions to any of them.

I have actually felt worse. I have had no "detox-type" symptoms. The funny turns have consisted of: internal tremor (worsening. This feels like you feel when you've had way too much caffeine. Same sensation. ) slight nausea (worsening and which does not feel like stomach-related nausea as there are no GI symptoms, but nervous system-related) Air-hunger, and weariness, with emotional lability; mostly wanting to burst into tears. Slight pain on right side of head/above eye. No irritability. No sleeplessness. Abnormal fluctuations in appetite. Increased intolerance to both caffeine and alcohol even in small doses. Increased intolerance to exercise (feel so terribly weary) Unable to retain energy for more than 5 hours in the day.

This may all be co-incidental. I was going through a "crash" anyway.

I am not giving up on anti-inflammatory herbs after just two days!. The mix needs a lot of tweaking. I need to include others. And as I say this may be because I was crashed anyway. There is a possibility the herbs were having no curative efffect.
I shall continue them and maybe include others like St. John's Wort. And we will see.

But it is so hard to know if what you are trying is making you worse....or if you were relapsing worse anyway, and the remedies are just neutral in effect on top of that! Or if there's some sort of healing barrier/crisis?????

Have you ever considered vitamin b deficiency anemia?
Yes MTpockets, I did. Yet my bloodwork showed no signs of either vitamin B deficiency or anemia. Nevertheless, I supplemented with a high quality vitamin B complex. Great for the first 4 days then not so good. Felt it was straining my system somehow. I dropped the dose and felt better on a lower dose. 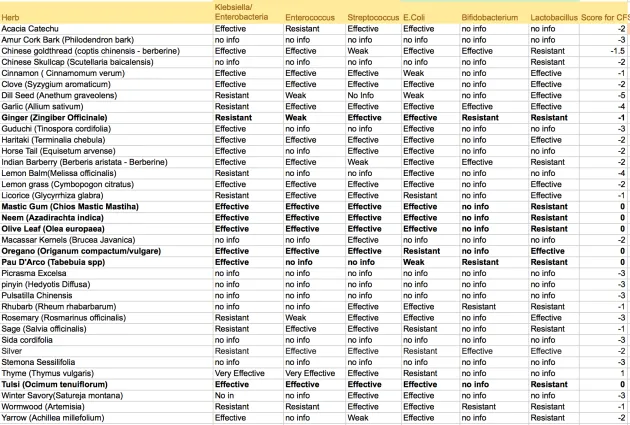 @Wolfcub, this chart from cfsremission.com says that Rosemary is effective against Streptoccoccus, E. Coli, and Lactobacillus. I know this is an old post of yours but wonder if you could try some of the others on the list that are also effective against those and get the same result. Then you could take them on a rotational basis.
Hello @Wolfcub & @Judee.....Yes, I also have to watch for things like Turmeric which, while effective, can also have some rather serious side-effects.

The one thing I've found for inflammation that's great, is pineapple. Both boswellia & bromelain can be purchased in capsule form but, as with everything, I think the best of the produce comes from the fruit itself. If allowed to ripen, it is delicious. Now I don't know if canned pineapple would have the same effect, but when you cut into a ripe pineapple, it could also be canned. We cut ours into quarters and I know that I'm getting the best of it.

I discovered it's anti-inflammatory properties probably 25 years ago when my youngest had a 4 hr. dental procedure to pull her eye teeth down. I filled her up with pineapple, canned, fresh anything I could think of and darned if it didn't heal quickly. The dentist was shocked...so I know this works, at least against inflammation in the mucous tissues. I use it myself regularly, and if we don't have fresh pineapple, I use the boswellia and bromelain. Hope it helps.

I have never heard of cleavers, so will be immediately be looking that one up. Good luck and I hope you feel better. You have a lot to keep going by yourself. Feel better. Yours, P.
You must log in or register to reply here.