In my earlier post, COMPARING REPEATED UBIOME RESULTS, I provided a tool but little guidance on interpreting. The key question is always whether the symptoms improved, not whether some numbers change. We do not know which numbers are significant and which numbers are just natural variation.

Model Of Onset
People see progression of symptoms since onset. Each progression is likely associated with a set of changes in the uBiome. This can be represented in the chart below (which likely have a lot more items than shown). 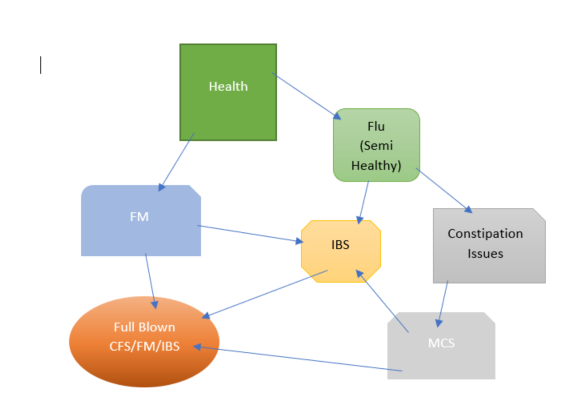 Model Of Recovery
Our Wishful Model
This appears to happen in two scenarios: 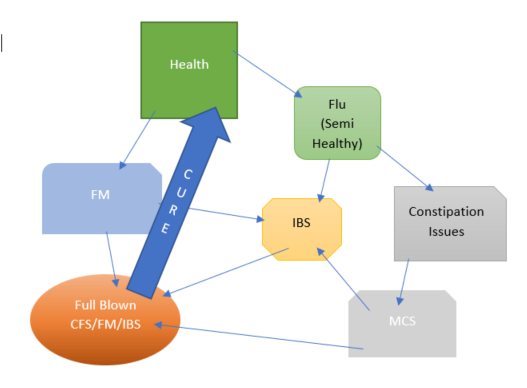 Probable reality
This model comes from the model that we may have more than a dozen bacteria groups involved in the symptoms. For depression alone, we see 28!!. Being able to correct all of them in one-go is not likely. You may correct one and those not effected adapt to try entrenching themselves better (like filling the empty space of the bacteria reduced). 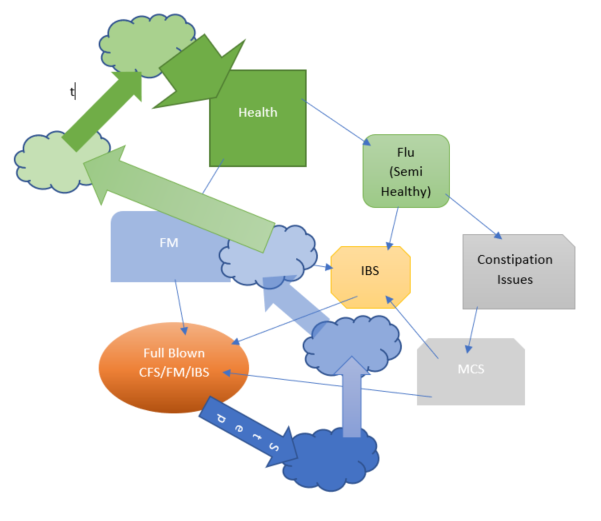 Interpreting results of Comparisons
I am looking at a person with two samples. I have not automated the comparisons shown below, instead I selected a sample and then went to the page and did a simple count.

Over all, we went from 31 matches to 27 matches. One increased and three decreased -- I wish it was possible to do decrease across all items...

Comparison Report - Summary
The original detail was done as a quickly and dirty report comparing numbers and attempts to keep people from becoming excessively focus on numbers (which we are not certain of significance - some are likely important and some are not... we do not know for sure which ones are).

From feedback, it is clear that a simpler report, the summary, would be easier to understand and likely more beneficial

Metabolism is likely the most significant
Like the profiles used above, this filters 'noise' and looks at the net result of a lot of different bacteria. I have just added a new item to the report

Average Metabolism (Ideal healthy would be 1.0)

In short, the metabolism is improving greatly.

The new report is Summary, and an example is shown below. The most significant ones are high lighted. 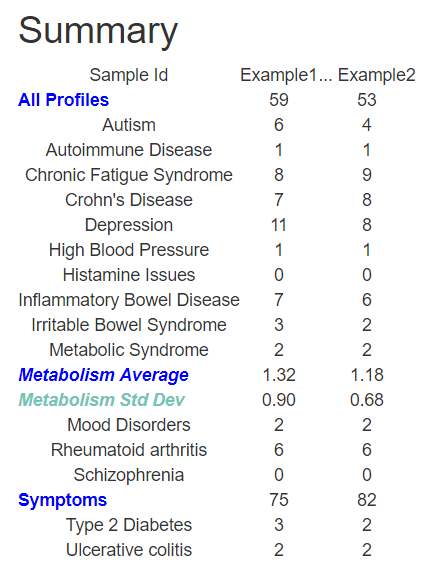 For Example 2, the list has grown smaller, with some new items appearing

For Example 2, the list is again smaller for < -4, with a few items in common