I am finally able to write again. Numerous factors have come together and efforts to prevent my normal writing efforts. I will list them with exacting details. Okay, yeah… details won't be exact and perhaps not even clearly defined, but I will offer some details in regards to this.

First off, thank you for viewing my pictures pertaining to my journey (s) outdoors. I'm glad each of you gets to follow along, despite my sporadic postings. My time spent outside roaming back and forth is most enjoyable. And I hope you are getting something out of it.

The internet reception at the nursing home is sporadic. I lose connectivity without notification. And because this happens, I use my full allotment of data within the first two weeks of the monthly time frame. As you might imagine, I do not wish to run up additional charges that someone else will have to pay for. And now that it's October, I can freely participate in voice to text writing, as well as internet searches and such, on my phone.

No, no, no, no one here has a fever. Well, okay. Perhaps My new roommate does. He just received the Covid-19 booster shot and he's rather ill as a result.

Anyway, I typically have done most, if not all of my writing, in the morning. That's when I'm fresh. Well, maybe not all of me, but at least my brain is fresh. And that's when words and ideas typically come to me - long before my brain becomes cluttered. But My new roommate tends to sleep in… most days he doesn't climb out of bed until noon (although he is awake, now and again). And once he does climb out, he typically vacates the room. But by then, I have also vacated the room. I am often outside somewhere, without internet access. And that means I cannot write utilizing voice to text.

So you know, this new roommate is a very good match. It's kind of a long involved story, but …. In any case, my roommate sleeps at night, and he doesn't watch television. If he does watch or listen to anything, he wears headphones. Talk about great fortune!

Beyond that, he's usually hanging out with his girlfriend in the afternoon and evenings, somewhere in the cafeteria.

So personally, I'm not wanting to subject him to my thousand-word blog efforts (second-hand … second sound?) by way of him having to listen to me incessantly dictate into my phone.

I recently had my EMG / nerve conductivity testing at the neurology office. The results? I do not have any nerve or muscle damage! Back in February, apparently, I supposedly had muscle and nerve damage. So now that my muscles and nerves have miraculously repaired themselves, I await the scheduling of my muscle biopsy.

For whatever reason, the procedure was exceedingly painful this time. I believe this neuromuscular specialist wanted to get down to the bottom of things. And boy, did he get down to the bottom! I still have a couple burn marks on my skin, and I've still been suffering after effects ever since. For instance, I've been in bed all day today. I don't know why that is, with any certainty, but this is the third time in the past week that I've not been able to move about. So somehow, I think all that electricity shooting into my nerves shorted something out (I was also stuck in bed all day Monday, too - ridiculously exhausted).

I've had intermittent intense pain, which we don't get into in any depth or detail. But yet again, it has much to do with my stoma area, and then extending off to the right in a direct line. Packing the area in ice helps. Eventually. Pouring ice water over the area helps. And changing out the bandage every couple of hours helps with the bile burning issue, but not the belly pain.

Mostly now, it's that I'm frustrated. And angry. And when I am both of those, I cannot write. Or create. Or do much of anything. So I spend much of my time searching the bowels of Amazon for power wheelchair accessories, things to make me safe on the road. Or the sidewalk. Or in the parking lot. Or I research other necessities that are not actually necessary. For the most part, I am doing dumb things to distract myself and take up my time.

I use the money I received after having returned my halfway non-functional refurbished Chromebook - to make my wheelchair safer. I purchased a sort of side view rear view mirror for 12 bucks. That way I can see anyone who's coming up from behind.

And since insurance didn't approve lights on my power chair, I had to provide them on my own. Out of pocket? Well, that would have cost me $2,300 to have them purchased and installed. So instead, I spent $24 on a 1000 lumen headlight, and two tail lights.

Properly securing them required my purchasing of Velcro strips. Although, I haven't quite got the kinks worked out yet in that regard. However, the lights do work, and people can see me.

I also have a pouch on the back of my chair with emergency formula and water supplies. But I still need to come up with a cowboy sort of hat that will shave my face from the intense sunlight. I was able to procure a tape measure, and it turns out my head is seriously fat. Or big. Or something. Yes, my head is extra large. Or XL, as they explain in the literature.

And it appears as though I have a hat on the way. Maybe tomorrow, maybe today, I just can't say. But that's what happens when I mention things, not intending for anyone to buy me a thing. Of course, people then suddenly, buy me a thing.

For instance, my new roommate always wondered why I wore nothing but a pair of shorts night and day, so he took it upon himself to buy me clothes. He purchased three tall and long (collared) shirts. I thought they would be too tall, or too long, but they fit. So now I have more shirts. But it's still too warm out here. Not right now. But mostly. Right now it's 79° at 10:00 a.m. and that's crazy cool, crazy nice. We are finally keeping it in the 90s for daytime highs the rest of the week.

Beyond that, my new roommate is trying to purchase other things for me, Well, offering to, at least. And I keep turning him down. It just doesn't seem right. Yes, I have problems with that. Those sorts of things. You guys know how I am.

Anyway, today is Tuesday and I'm feeling a lot better. After two days stuck in bed from start to finish (mostly), I am up and about after my shower. Although, I did manage to roll around yesterday evening for a bit. I couldn't miss the encroaching storms. We had some serious dust and then unrelenting wind that lasted nearly 2 hours. Sustained winds over 40 miles per hour, with gusts over 60 mph. That's quite unusual and quite rare for us. And probably for lots of you. The temperatures dropped rapidly enough that I had to wear a jacket outside, or it could have been the matter of my packing my exterior gut with ice, comforting yet chili side effects! Either way, chilly 73° winds blowing the tumbleweeds from north to south created a fine scene to bear witness.

Believe it or not, I've been in this nursing home for a year. One whole calendar year. And finally, and most probably, I will be getting my muscle biopsy fairly soon. Remember? That was my main motivation for coming here in the first place. I needed to get the fucking muscle biopsy in order to make …determinations. Ugh!

That'll be it for now. I'll attach a few images to give you something visual. 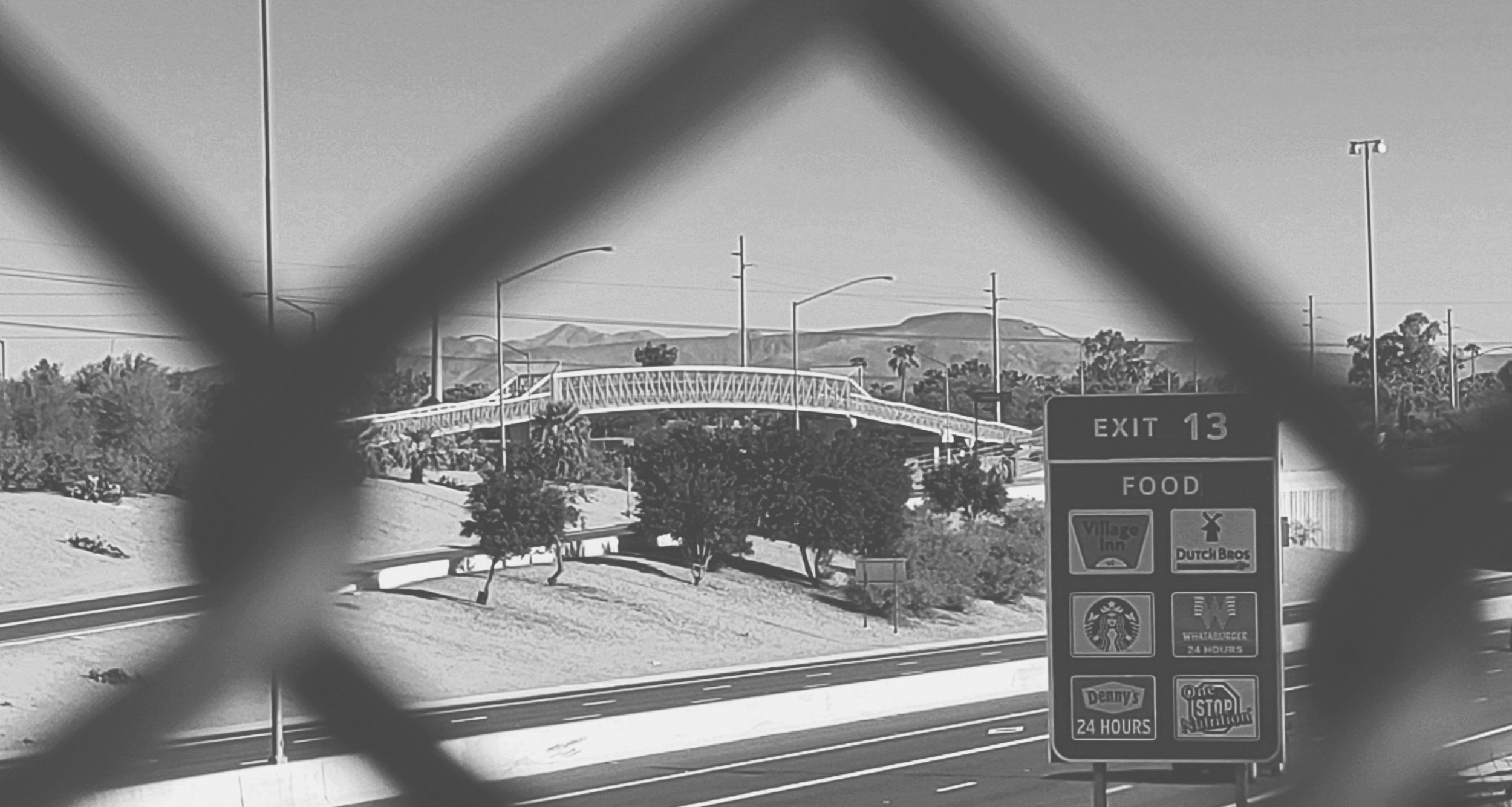 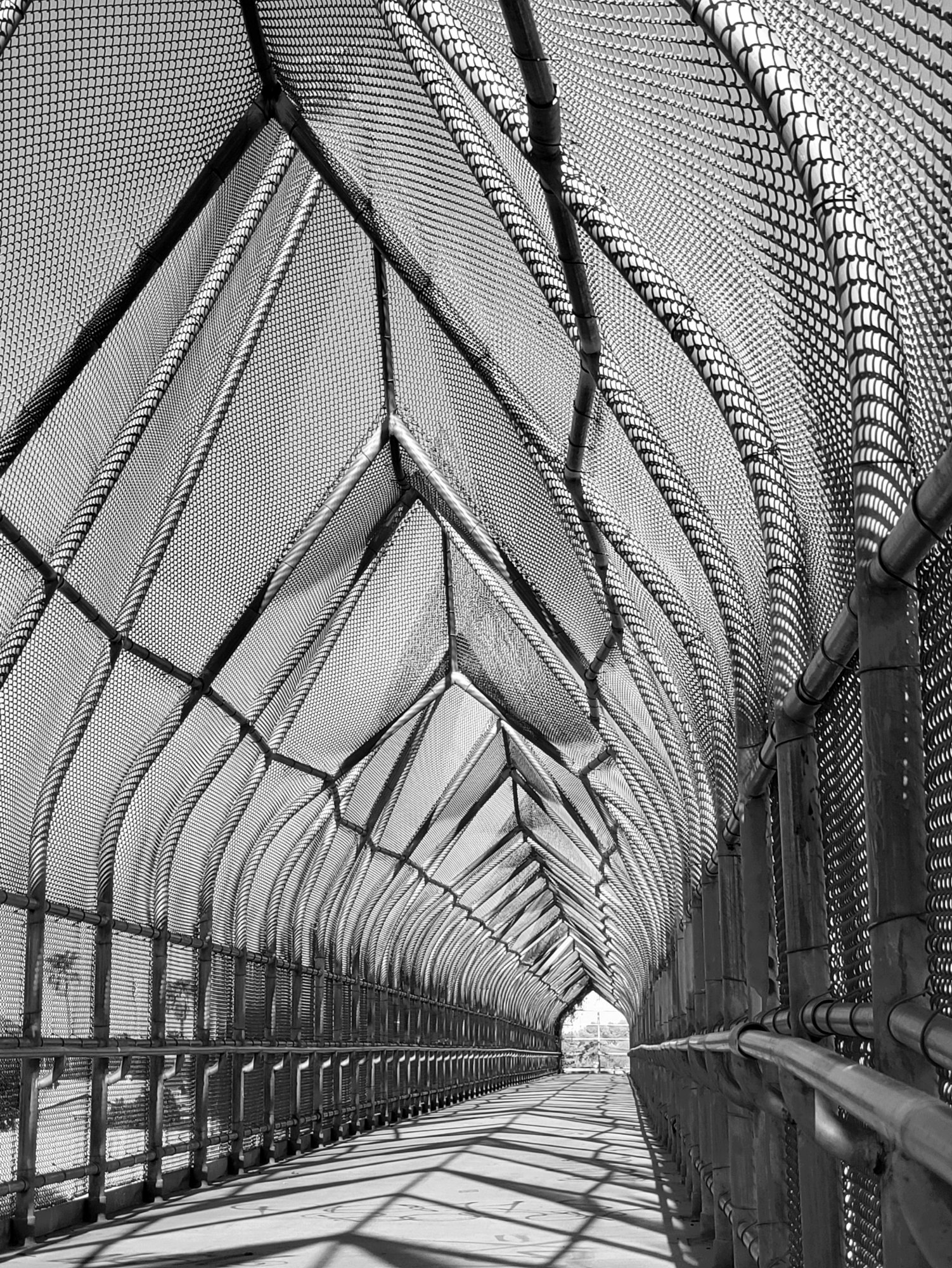 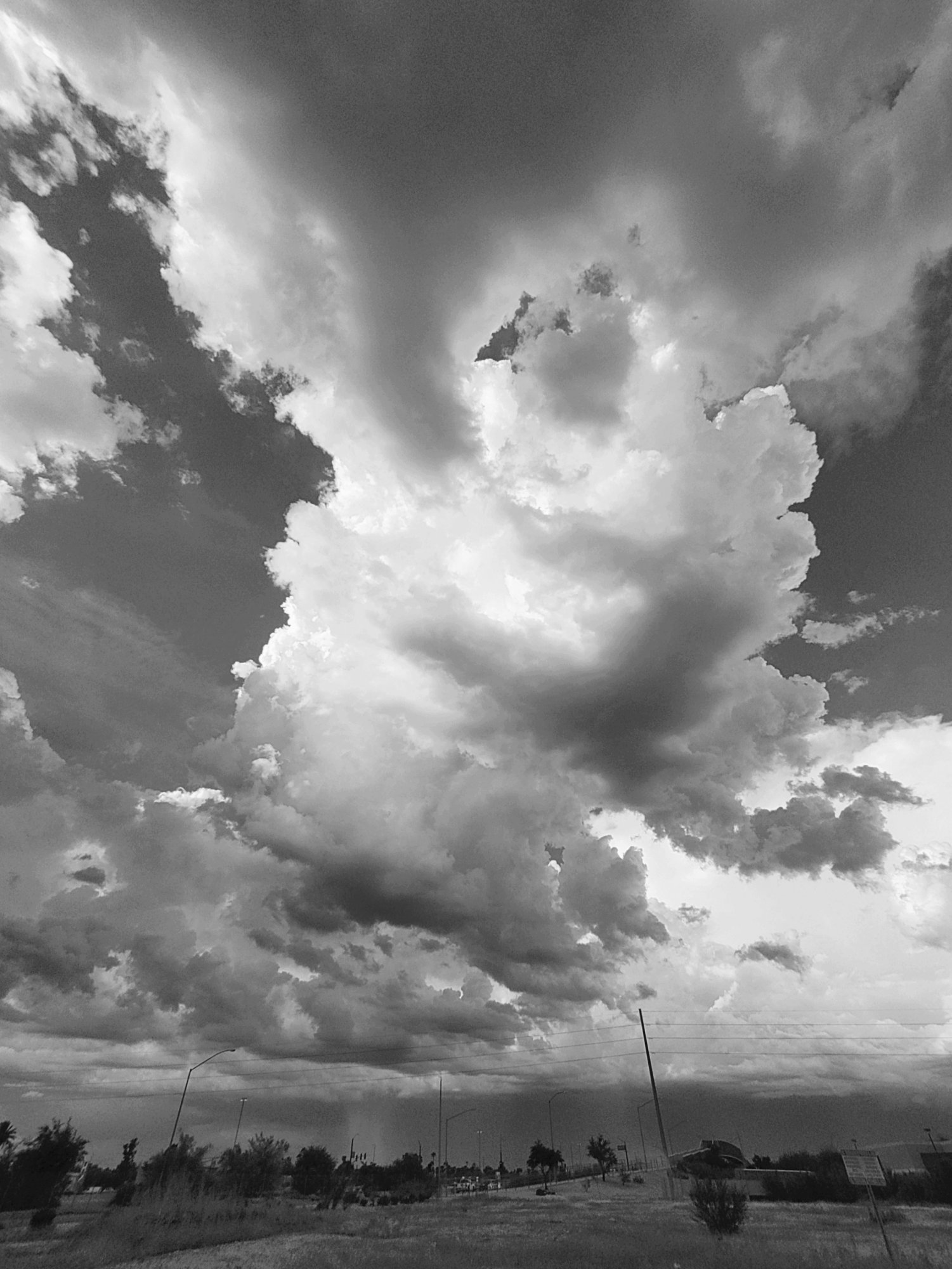 Its pretty wild its been an entire year already.
Its been an honor to watch your revolution from a sheltered room for 6 plus years to this new world and how much your life has changed. I think many of us, have learned quite a bit from your documented journey. Wishing you moments of peace and fair temps, under clouds this week as you contemplate the trek you'e been on.
Its been a YEAR?

while I don't want to think about the year passing, its exciting to think about all the remarkable progress you have made in recent months, despite the obstacles and twists and turns..

I'd like to hang out at the Oddly Configured Overpass Cathedral...such a great shot there....and proximity to Exit 13 is really really 'cool"...if you followed the directions, you could find food there, @Howard. Or at least its described as- food.

the new room mate sounds wonderful, so the trade off of being quiet in the morning seems possibly well worth it.

to more glorious skies! .....Rufous
Yes, the years do fly, don't they? Well, let's hope you don't get COVID again and you'll have your muscle biopsy soon. At least things are moving forward (albeit slowly).

The new roomie sounds like such a major improvement on some of the last ones. I don't know why the others couldn't have used their headphones....did anyone mention to them? Anyway, let's hope you're both "at home" for a time now.

A girlfriend, huh? Well, let's hope she'll show up with plenty of treats that he'll share with you in the upcoming months.

I thought the last cloud looked like a chicken or snowman? Anyone else. Behave yourself!! Yours, Lenora
Sounds like you got yourself a good roomy

I got the nerve conductivity tests years ago and the only thing the neurologist wrote about regarding the results in my file consisted of two words. Sensory disturbance. I opted out of the muscle biopsy mainly because he was an asshole and eluded that all my problems might be in my head. He wouldn't even write me a prescription for a wheel chair. Ugly rant over.

So good to hear from you Howard.....................as always. Sending hugs
lenora said:
I thought the last cloud looked like a chicken or snowman?
Click to expand...
I don't see it Lenora but I'm sure it's there! More often than not the things I would see in the clouds others didn't and vice versa. There were times though that the picture in the clouds was more than evident for both parties to see.
Hi Tammy.....reverse and go back up and it looks like either a beak or a carrot for a nose. It's beyond the mid-point.

If not, just call me crazy! Yours, Lenora
lenora said:
Hi Tammy.....reverse and go back up and it looks like either a beak or a carrot for a nose. It's beyond the mid-point.

OK, he actually saw what I was talking about, so we'll try this again:
If the side of your hand is in the middle, it's above it and starts just below the dark clouds in the center of the picture. I can even add things to it. What is seen by me obviously isn't readily available to everyone. Just interesting, that's all.

I'd still give you an 'A'.....I can't draw, but my imagination is good (and I wasn't great at math.) Yours, Lenora (Remember this is my imagination...so, it's not cast in stone.)
Last edited: Oct 7, 2022
I agree in that well underneath the cloud it did look very animalistic.

Unfortunately the picture somewhat loses the three dimensionality...
Yes @Howard.....and if you go a bit more to the right, if it's a chicken you're thinking of, it looks like feathers. I love clouds....used to spend so much time looking at them when a child. Yours, Lenora
You must log in or register to reply here.