My ME, Part III - Visit to Mayo

Mayo is a unique experience. My mother bravely accompanied me as I decided that clearly the best time to visit Minnesota was in the dead of winter: 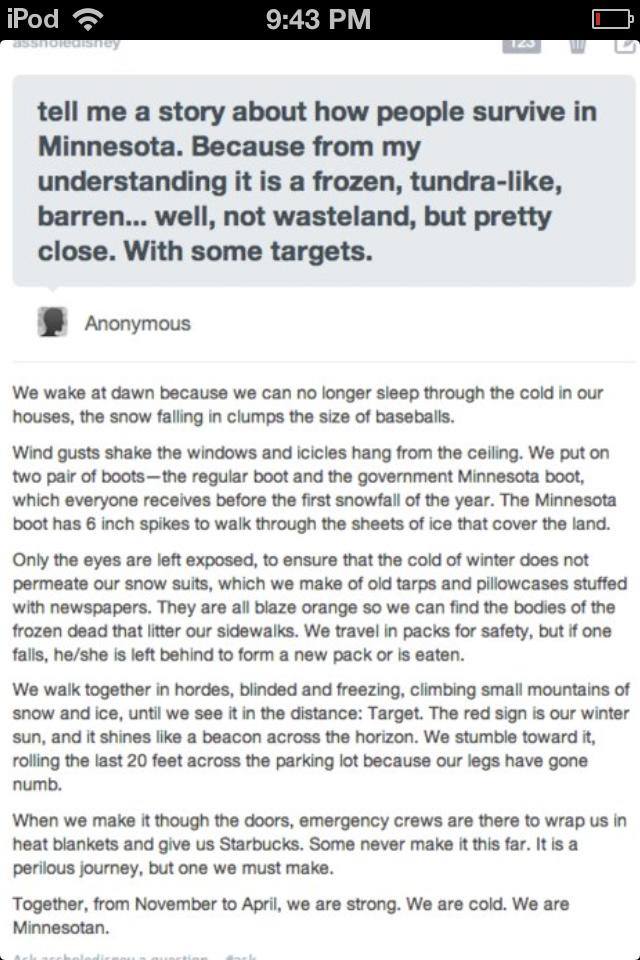 Yeah... it's pretty much like that. It was -18 degrees F while we were there. Luckily, Mayo is one gigantic rabbit warren with all these connecting tunnels, so we rarely had to be outside.

I can't be sorry I went to Mayo. I think if I hadn't, I'd still have very little compelling evidence I'm ill. But you have to be in the right frame of mind, and you have to understand what Mayo's really all about.

Mayo is assembly-line medicine. You go to an internist and they talk to you about your issues. They make appointments with those two specialists, and send you for bloodwork and pee work and such. If you're lucky, you see those specialists right away. If you're not, you sit there in the waiting room, hoping someone is too lazy/cold to show up for their appointment. IT NEVER STOPS. There was not a single moment the two weeks I was there where I did not have someplace to be, where I did not have to go get blood drawn or a test done, or have an actual appointment. It was non-stop. Luckily for me, everything is a fifteen minute walk from everyplace else, so while I constantly felt the cold/weird/numb feeling of impending PEM, I tended to hover there rather than tip over into awfulness, but for one rare exception or two.

Mayo has some of the best doctors in the country. You'll see people who are caring, well-informed and intelligent, who talk to their fellow physicians in order to try and figure out what's the matter with you. Unfortunately, you'll also see some of the worst doctors you've ever seen: people who are intent on pushing you through the mill as fast as you can go, who aren't interested in little details like your bloodwork or your history. The contrast between the 'old guard' of physicians, who were at Mayo back when the emphasis was on collaboration, and the new blood, who are much more speed-oriented, is striking.

I'd make myself dizzy just trying to remember every test I took, every doc I saw, but I counted up appointments and labwork in the twenties or thirties off the top of my head one time. I found out an enormous amount.

1) The most important thing I had done was an ITT (insulin tolerance test). In this test, you get injected with insulin to induce hypoglycemia (a stressor). Various hormone responses are measured.

-My cortisol just acts like nothing happened. I have no measurable cortisol response to stress.
-My growth hormone puttered up until it was about a third of the lowest possible healthy value, then began to drop.
-My cortisol is at normal levels when I'm not stressed.
-My ACTH is still very low.

2) The ACTH stim test results from the local hospital and Cleveland Clinic weren't flukes: on taking a low dose of cortisol, the same symptoms resulted, complete with eczematous rash on the inside of both arms. I might actually be autoimmune to my own cortisol. This would suck, so let's pretend I have an adrenal tumor instead?

3) My immunoglobulin levels are wonky.

-My IgE is very high. That implies a Type I allergy, the anaphalactic kinda thing. I wonder if this is why breathing is an issue?
-My IgG1 and 4 are both low.

4) I pretty much failed the exercise test.

-I went into acidosis.
-I do not have normal exercise capacity.

5) I pretty much failed the methacholine challenge.

-This is to see if you have any breathing difficulties.
-Guess what? I do!

6) My serotonin is quite low.

In mentioning the last, it occurred to me that I should mention that I tried 5-HTP and it induced the premenstrual symptoms I used to get: racing thoughts, fever, muscle twitching. It was so like those episodes that I had no choice but to conclude that I have a little jolt of serotonin, premenstrually. There is actually a kind of seizure disorder in which that pattern occurs. Later on, I tried a serotinergic herbal blend, and the same symptoms resulted. In both cases, the symptoms were more profound than when they occurred 'naturally', and the symptoms woke me every few hours at night until the herb/supplement in question had completely worn off.

Needless to say, I expected my serotonin levels to be high rather than low. Probably I have increased receptor sensitivity or an increased number of receptors, which makes me so sensitive to serotonin that increasing it causes these symptoms. [Edit: as it turns out, I have a MAO-A +/+, which means that my ability to break down serotonin is compromised. This means any serotonin in my body hangs around, like that friend who chills with you and your SO and refuses to go home. According to Gondwanaland, people with this mutation are often super-sensitive to serotonin and serotonin-inducing compounds.]

Okay, I feel like I'm barely making any sense anymore at this point, guys, so tune in next time for what I'm taking now, why, and how it has (or hasn't) helped me.

I hope you post about your gp's response to the results you got from Mayo.

cheers!!
You must log in or register to reply here.