Part 5
So off I went as fast as I could across the ridge and up Baxter Peak. Mac and Jenny said later it looked as though I was flying from boulder to boulder. I don’t know, but I did make it to the peak in quick time. The person we saw had left the peak on his way down the other side, so I had to travel down about a quarter mile to catch him. Interestingly he did have a phone. I told him the situation and he called the ranger station far below by Chimney Pond. They said they would send someone up to assess the situation. The phone man left and I returned back to the top of Baxter Peak and across to South Peak and relayed the information.

After waiting another 30 minutes we saw a figure making its way towards us from Baxter Peak. The figure moved very slowly in our direction. Many times we wondered if they were moving at all they were going so slow. Then, finally I could see who it was and I shook my head in disbelief. It was Carla. Of all people they sent Carla with zero experience. Once she arrived she said she was getting near the trail that descended into the basin when she got the call so they told her to come back and see what was up. Well at least we had a two-way radio, but it was not looking good. It was getting colder and windier and Libby’s body temperature was dropping, as was her outlook, and she began to shiver. We had almost zero food or water left from our extra ascents and descents of the ridge and I was the most experienced person left on the mountain. Dark was coming, Libby was starting to go into mild shock, we were miles from the ranger station and thousands of feet above it, and time was of the essence.

Now that we had a two-way radio secured, we needed to get Libby situated better so her body would remain warm. Jenny was just hanging out with no idea what to do and so she was covering it all up with humor. Mac, who was a rather self centered individual, was also kind of taking the whole situation rather lightly as if it were a joke, even when Libby began slipping into shock. He just thought the whole series of events was “cool and exciting”. Both of them were rather useless.

I took my heavy windproof and waterproof duster out of my pack and placed it over Libby and gave her the rest of my water. I had Mac and Jenny sit right next to Libby and keep her talking. We had previously positioned her down next to a rather large boulder so she was out of the direct wind. Now it was just a matter of keeping her alert and as warm as possible until we could get her off the mountain.

Meanwhile, the ranger station was in communication with Carla asking her questions as to what was going on. Since Carla had very little experience she was just frustrating the ranger on the other end with vague answers. It was not long before Carla told me to talk to the ranger since it seemed I was far better at this kind of thing, and at least seemed like I knew what I was doing.

I took the two-way and the ranger on the other end of static asked if I could explain to him the situation. So I told him in as direct a manner as possible. I explained to him that a hiking partner of ours, female, early 30’s, about a hundred and sixty pounds had injured her right knee and was unable to walk and in mild stages of shock. A pause… the ranger replied, “Is she able to walk?” I said that she was not able to walk or bare any weight on the knee. “Where exactly are you located?” the ranger asked. I told him we were sitting on the top of South Peak and there were four people in our party, five including Carla. The radio crackled again, “Can you carry her out?” I said, negative, we cannot carry her down the mountain. The voice on the other end of the two-way radio said, “Stand by, I’ll get back to you.”

We waited for around 15 minutes for a call back. In the mean time we were discussing options. Libby could not walk and we could not carry her. Carla asked what the “normal” rescue measures would be for such circumstances. I asked how many rangers were at the cabin and she said there was only the one. I looked around and calculated the distance with the elevation and terrain and said I did not think they would attempt a land rescue on South Peak with coming darkness. It would take them until the middle of the night at least to reach us. I said the only viable option I saw was an air rescue, and that would be tricky with the steadily increasing winds.

The radio broke in and Carla lifted it to her ear so she could hear over the wind noise. In a moment she asked me to communicate with the ranger again. I took the radio and announced myself. “What is the weather doing up there?” the question came through as. I replied the temperature was probably around 48 degrees (it was July remember) and the wind was about 20 miles per hour from the west. Silence… “20 miles per hour.?” the shocked voice came back with. I said yes the winds had been picking up for the last hour or so. The ranger then asked if there was a place to land a chopper near our location. I shook my head and looked around. South Peak was a mere mound of boulders jutting up off the Knife edge ridge. The ridge connecting South Peak to Baxter Peak was heavily bouldered and very uneven. There simply was no place for a chopper to land. “Stand by.” The radio fuzzed.

Another 15 minutes or so passed before we got the next call. The ranger was now double communicating with me and air rescue on another line. Air mountain rescue was asking what the wind conditions were. I told the ranger it was remaining steady at about 20 mph. After another 5 minutes of communication it was decided to attempt an airlift by way of a rescue chopper out of Millinocket. The problem was that it would take them about 45 minutes to reach us and none of us knew how strong the winds would be at that time. If the winds blew any harder, the air rescue would be too dangerous and would have to be called off. They were even hesitant with the winds blowing at 20 mph.

By the time they would reach us it would be dusk as well and so they would be not only chancing and racing against the wind, but also the encroaching darkness. If either increased, we would be stuck for the night. We all huddled together around Libby rubbing her down and keeping her circulation going. She was not doing well, slipping in and out of a conscious state and her circulatory and nervous systems were quite sluggish. Her pulse had dropped off quite a bit as well in the last hour.

To be continued in Part 6 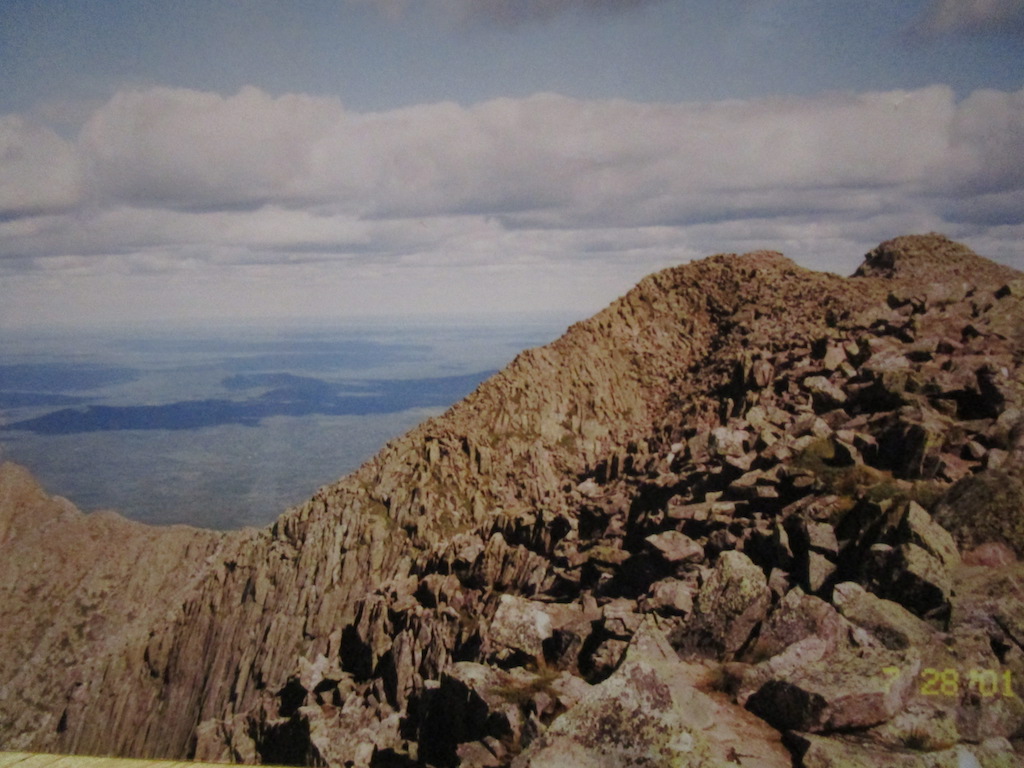