Monsoon season has kicked into gear earlier than usual. We've had thunderstorms in the vicinity four out of the past seven days. At most, we've had one tenth of an inch of rain total. But that's a lot more than nothing. June is usually all about nothing. Besides heat. Cloudless days. And no rain.

My mother's phone doesn't work. Her flip phone. Somehow she activated Airplane Mode. And I spent two hours yesterday on a video call trying to explain how to resolve her phone issue. Failing miserably. Even Angela tried to help. She walked in the room mid frustration and took over the phone call. So today, I'll spend 3 hours trying to resolve the phone issue. And then I'll spend four hours on Sunday. By the 4th of July, I'll be spending 24 hours a day trying to resolve her airplane mode issue. That's my goal. That's my objective. We all need goals and objectives. Now I've got both.

Really, there's nobody else to help. The office is closed for the weekend. And everybody else is really old.

My older sister suggested my mother take a taxi or an Uber up to the nursing home here, so I can push a series of buttons, and then send her back home.

Of course, I haven't seen my mother in 3 years or so. But it will cost her 50 or 60 dollars one way. Might as well get her a new phone instead, right? My sister agreed. We will probably have her throw that "broken" phone away and just send her a brand new one. Pre-programmed, of course.

So you know, she has a medical alert bracelet and necklace in case something goes wrong. So I guess that's positive, right?

Angela purchased a pint of blueberries for me yesterday. And I've eaten a fair amount. No side effects. Yet.

I am pleased. Right now I have them sitting on the windowsill, and I'm hoping they don't get moldy. The internet says I can keep them non-refrigerated for 2 or 3 days. Perhaps I will finish the pint off today. And yes, the blueberries were rather yummy.

Tale of the Tape

I received six rolls of medical tape yesterday. Hooray! My apparatus should be secure for the next two months. And it only took $11.47 to get me there. Well, that was somebody else's money. She knows who she is. Thank you.

And that's all I got. I wanted to post a few non-negative things to show that I am capable of participating in non-negative events.


Ohhh… I was exposed to Covid-19 last week and somehow it didn't take. I've been on semi-isolation status. And I'm the only one in my wing who attained such status. So everybody's trying to figure out who it was that I contacted... but still, days later, we don't know.

I seem to contact people more directly than most others. Conversationally. And I suppose, by touch. People like reassuring me. At least, I think that's why people touch. Plus I've made it known. Since I've been here. Please, by all means, touch me people, touch me! Hahaha…


So here we go - I will post some monsoon season pictures for your perusal. Perusing? Eyeballs. You know what I mean. 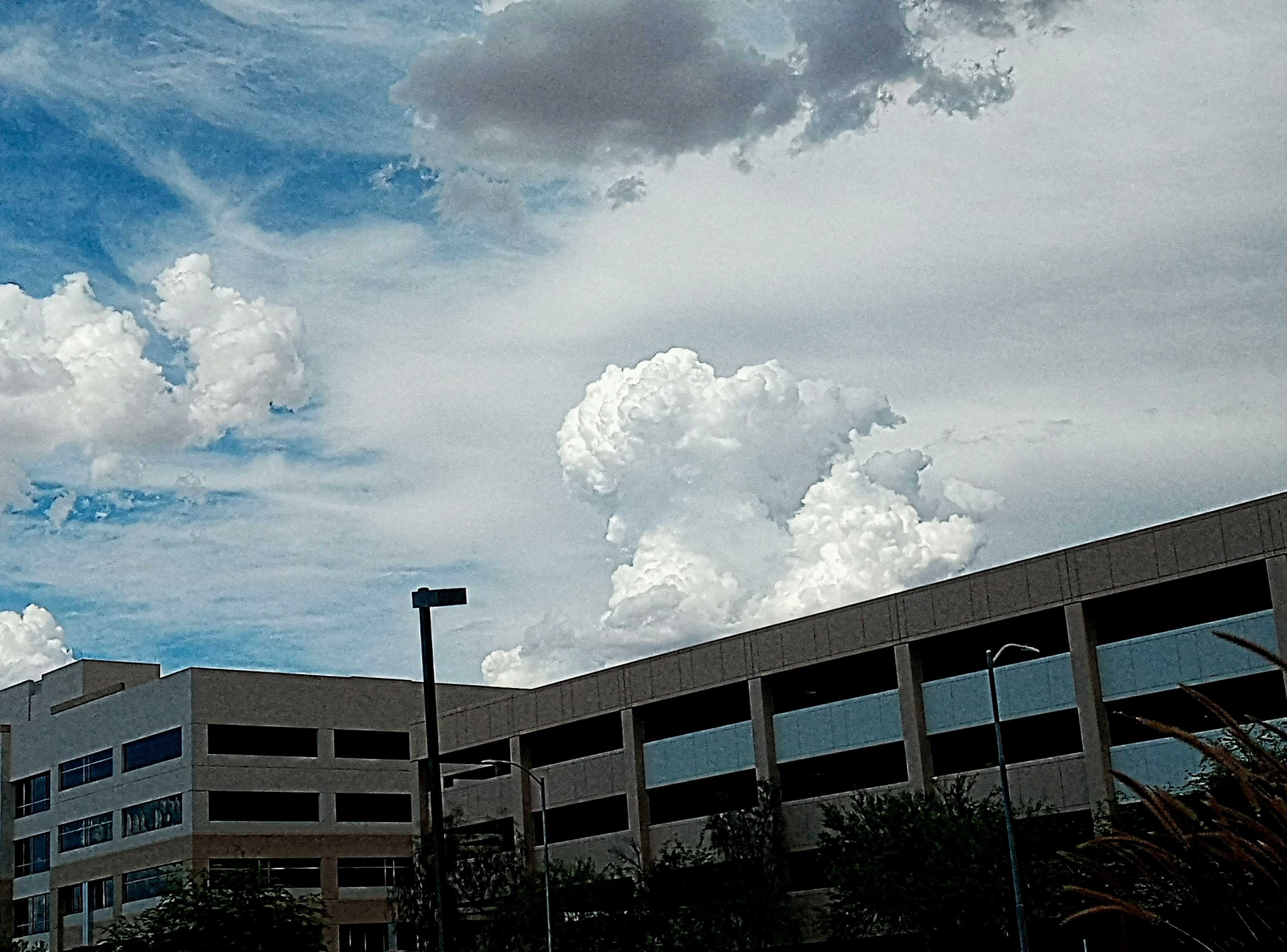 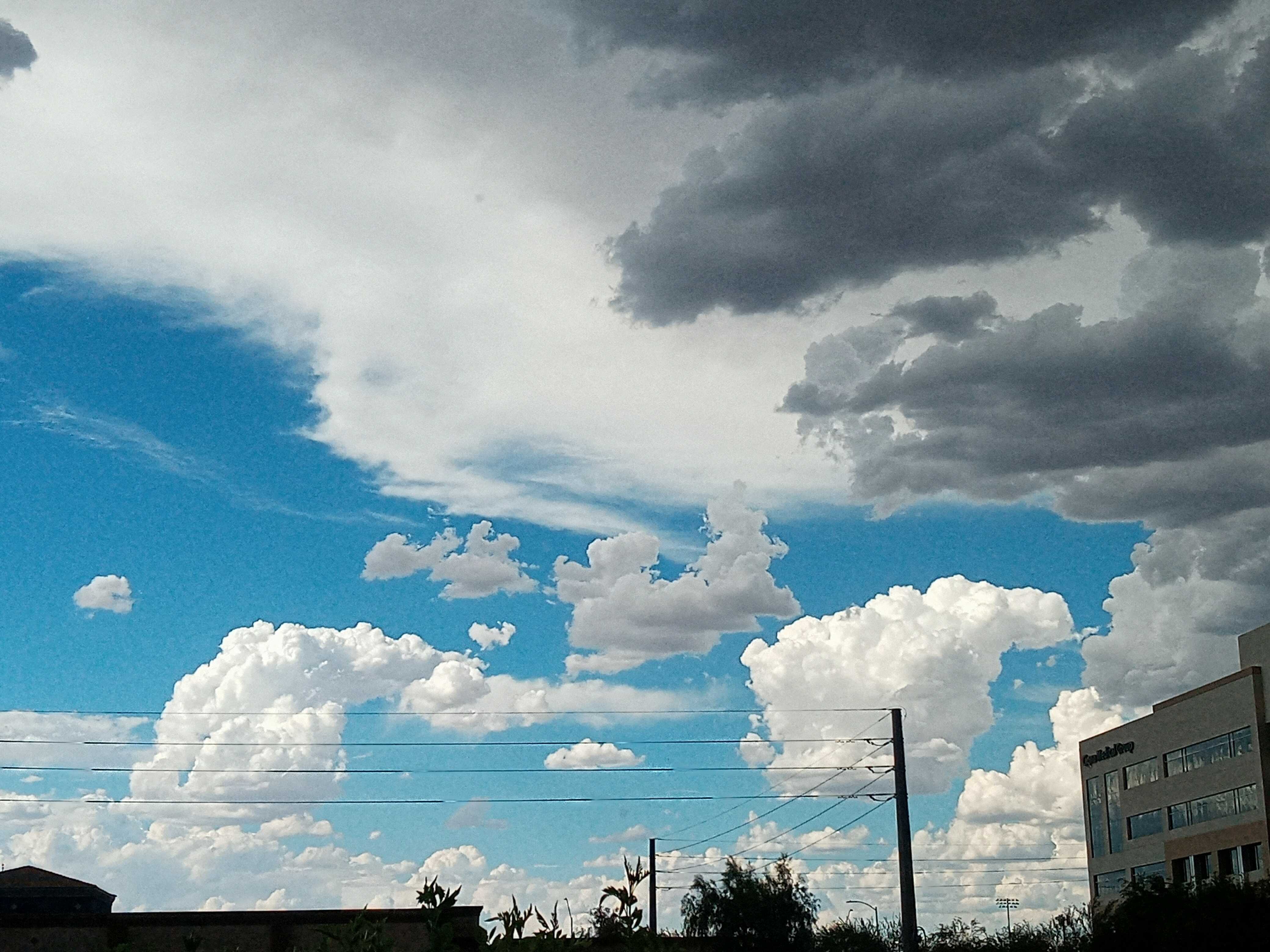 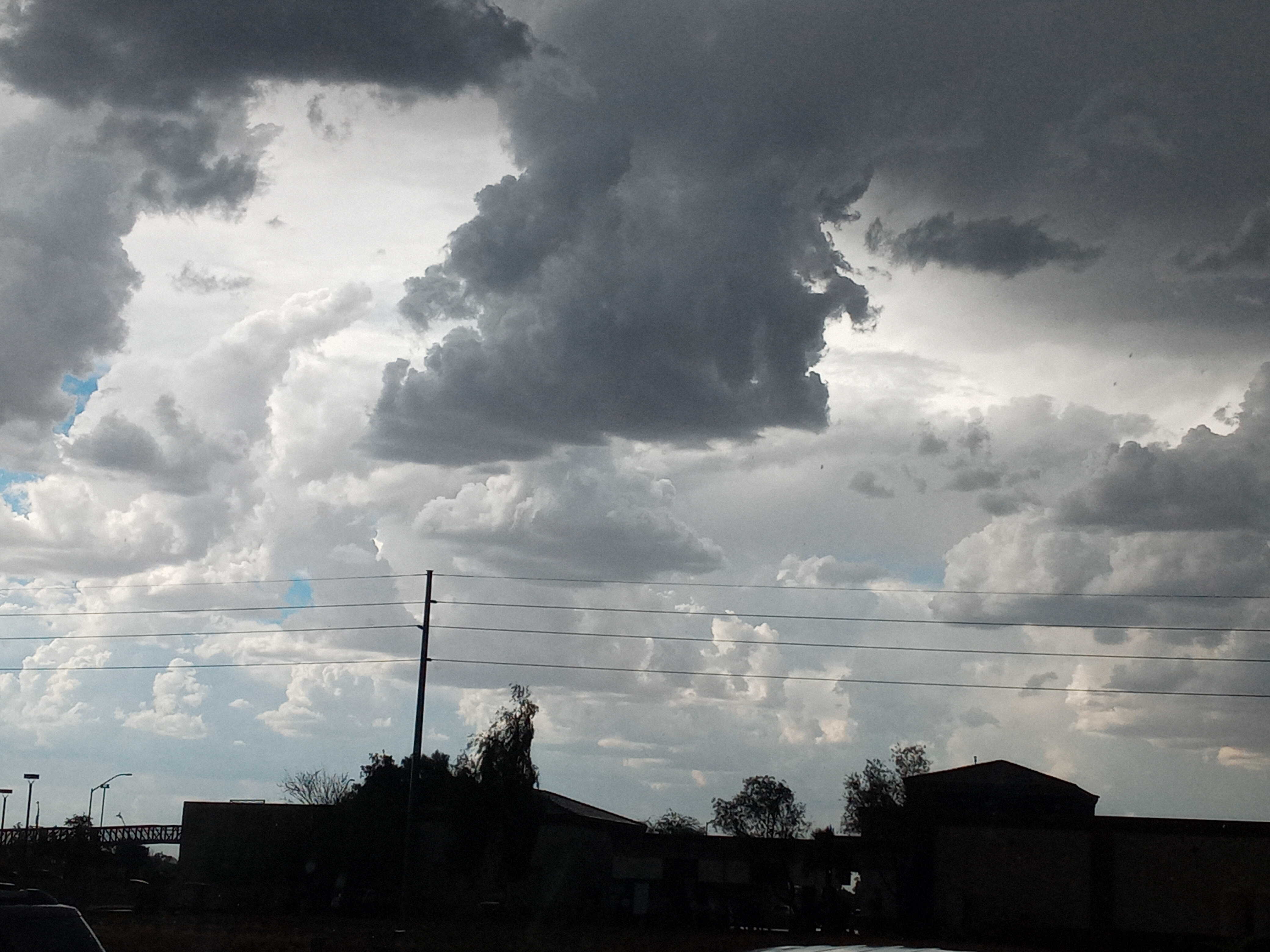 um...maybe someone (@Rufous McKinney) happens to know the name of those please.
I got in on that sky, too. Same weather event was here.

It was pretty remarkable, its simply been quite a while that the vibrant cerulean blue combined with the voluminous white puffs and grey streaks and rumored chain lighting ( I slept through that part, supposedly). Photo One, possible thunderhead forming.

AIRPLANE MODE: that likely occurred by accidentally swiping the very top of the smart phone triggering a drop down menu which stupidly includes the switch to vibrate or silent.

Phone aint ringing. Why is the flashlight on?

My husband. (we are the paradigm of Luddites here)

He uses my phone, cannot operate it and why isn't my daughter calling? Oh I have 22 missed calls from her, and it never rang.

For three years now, I am to get my husband "something" he can read internet stuff on and get him to relinquish my Phone and laptop.

Glad you got resupplied....keep us posted so you don't run out.

I'm all surrounded by medical tape, too! I'm Nurse Jackie. My husband got a hole in his retina repaired in theory and I do bandage replacement and eye drops.

I did not do Accompany him To the Procedure. Instead, an ex taxi driver friend, took him. Bribed with cash....

We could have written Taxi Diaries, before somebody else thought of it. While I had my extensive notes on jury duty, I intended to write up for a New Yorker type article, my husband had copious notes from the Taxi driving era.....unfortunately they became more fuel.

I was the Sunday Taxi Driver, for about two months, in a very small town, fall of 1980. Driving some boat anchor or another. This older woman, she'd call for her ride to church, around 7 am every Sunday. I'd have to pick her up, then its 8 am on Sunday and nobody wants a taxi ride for the next 7 hours. Oh how I resented my lucrative job...

It was nothing like my husbands more intense episodes of taxi driving in a major urban area. You learn alot about life, driving cab, meeting real people.

One morning, I woke up and this very nice older woman was sleeping on our sofa. She'd apparently been stood up at the train station, was nearly lost and my husband decided she needed saving.

Taxi drivers are often civic. My husband is still friends with a woman who had three kids and twenty Chihuahuas, and some serious health challenges, which my husband helped her with. This woman is now Artist in Residence at a regional college. WOW. Taxi drivers save people.
Howdy neighbor

Not surprisingly...............NM has had similar weather conditions as AZ. Monsoons happening earlier in the summer than usual. As you mentioned, June is usually the month of nada. Windy season was MUCH different than this year. Usually just March and some of April are the windy months. This year we've had winds from March through June so far. Seems I've notice weather patterns changing here over the last several years.

The thunder Gods have been talking today and it's looking pretty black over the Mts. Hopefully some rain later on. We've had some great cloud coverage the last couple of weeks but very little rain to speak of.............at least down here in the flats. Thank goodness at least the Mts are getting some good rain.

The storm generated lightning fires further north, but was somewhat wet so it didn't blow up too badly, lucky us....

(I hope the New Mexico fires got doused)
Tammy said:
Not sure about your comment on covid. So there are people in the facility right now that have it............but they can't figure out how they were exposed? How do you know you were even exposed?
Click to expand...
I apologize if that was confusing. Basically, two employees tested positive. But due to HIPAA laws they won't tell us who these employees are - So typically, we utilize the process of elimination.
Last edited: Jun 26, 2022
As of yesterday, we are officially in lockdown mode. My next door neighbor and friend (an unvaccinated 87-year-old) tested positive last night for Covid-19. And she's sick.

Dora and I hung out together two nights ago. For an hour. Outside. I helped grab snacks out of her purse, annnnd... hopefully that wasn't enough to infect me.

She's highly religious, so I should have assumed she's not been vaccinated. Most of the religious people here aren't. And yes, it amazes me. I need to be more careful. Choose my friends more wisely.... assuming the unvaccinated residents are more likely to contract the virus than the vaccinated. I do not remember if that's true or not.

Oh. And I did have direct contact with the two employees who tested positive. But each of them were wearing their masks at the time. Hopefully that was enough.

As an added bonus, we actually have four CNAs on the unit floor today. We've never had four since I've been here. On Friday, we only had one to start off the day. Rough going. Especially considering we have a full house.
I hope DORA hangs in there, gosh that sounds so hard...

my niece the RN has had COVID three times, and the first grade teacher has had it twice (at least...)
Howard said:
My next door neighbor and friend (an unvaccinated 87-year-old) tested positive last night for Covid-19. And she's sick.
Click to expand...


Please keep us informed on how she's doing...

...you too. Don't want you to get sick again. Hoping all the sunshine boosted your immunity.
Dora is congested, but hanging in there. She's still loudly voicing her displeasure about things, so that's a good sign.

The bad news? Well, my dedicated CNA (Betsy) wasn't feeling well this morning, so after she left my room she went to swab herself for covid-19, and guess what? She tested positive. So now, I may be doomed. Or worse than that. Or who the hell knows. Maybe I'll skirt past the virus this time.

She survived her last bout rather swimmingly. So I'm thinking she'll be okay.

Ummmm. Yeah. So it goes. Two of the people with whom I spend the most time... The other? Well, I hope Angela escapes this. She was in my room on Saturday for an extended period of time.

Maybe the blueberries will kick in. Antioxidants!
Let's hear it for antioxidants!

So yeah, thanks for asking. And I'm especially hoping CNA Betsy is doing alright.

We do have two additional cases now, but so far so good. And my neighbor and friend (Dora) seems to be recovering just fine!

Glad to hear you got through something or another...not too badly....And horray, Dora pulled through it seems.

Figure other colds and flus exist still. My husband had something, and several colds are about.

Feel better soon!
You must log in or register to reply here.