These articles are simply about the energies of each moon of the year. I wrote and published all of these in a long article years ago. Today I’m going to share them here, one by one, each month. These teachings/philosophies are from my Native American mentor who guided me through my childhood and taught me a great deal about this world and his people. I met him when I was 9 winters of age, and he began teaching me a year later when he was 86 winters of age. He was of the Munsee Lenni Lenape.

In December I will post two entries because there are not 12 moons in a year, but 13 full moons.
Each year has 13 moons, not 12.
Each moon is about 28 days long, but not exactly.
Since the calendar doesn’t add up, a Leap Year is inserted every 4 years to balance the scales.

Wow, here we are on the eve of August and I’m just getting around to posting about the July moon! Well better a bit late than never, as the saying goes.

This moon’s name is quite obvious I think. Summer is upon us in the Northern Hemisphere and that means the Sun is as close as we ever see. More sun rays, and more light, equals more heat. Of course, this time of year is also well known for Storms that create both thunder and lightning.

What does the July Moon hold in its summer’s grip then? Both Heat and Lightning. So what do both have in common? FIRE! This is the Moon of Fire, the season of fire, and the time of fire. We must remember that the environments and ecosystems rely on opposites to create the dynamic movement within their intricate webs to create and sustain life. Here we have 4 unique seasons, each supported by a dominant and subordinate element that play upon one another. Other places have only 2 seasons, like many regions of Africa, which have a dry and a wet season, again opposite elements.

Summer is the time of Fire. The sun is highest, closest and so the air is hotter than it is in the other seasons. The time of day connected to summer is 11 am to 1 pm. The organ connected to summer is the heart, the main fire organ within the body. Of course, the power of summer comes from the depth of its opposite, winter. It’s the same as how we treat our bodies during summer will determine their internal strength in the winter.

Winter is cold and dark, the opposite of summer. The kidneys belong to winter. It is no surprise then, the well-known medical fact that the heart and kidneys have a very deep and necessary connection and “communication” path between them. They both directly rely upon one another to function properly and maintain balance. Medical science has seen that when the heart is too hot the kidneys dry up and become imbalanced. Likewise, when the kidneys are dry they overheat and this aggravates the heat in the heart. The heat of the heart is the only heat in the body that is supposed to descend rather than ascend. Heart heat is supposed to sink to the kidneys and nourish them. Kidneys like to be warm. Cold kidneys in the winter equal a sick body. The heart likes to be cool, even though it is a fire organ. You see, opposites supporting one another.

Heart heat is supposed to descend and literally “steam” the energy of the kidneys with then rise into the body nourishing other organs. Summer/Fire supporting winter and Winter/Water supporting Fire. Fire gives water life and movement and water tempers fire and allows it to be nurturing rather than destructive.

But what is the Medicine of the Heat/Lighting Moon? The above is the physical dynamics. The Medicine goes right along with the Fire element, Creativity.

Well, that’s pretty simple. This is the moon in which to embrace fully the creative source and creative outlets from within. This is a time to bring the ideas (lightning) into physical manifestation (fire). Fire creates light and heat which is necessary for life on the physical side of existence. But for creativity to birth and expand into the physical there has to be inspiration and ideas first.

We don’t create unless we first have an idea or a flash of inspiration. This is the Medicine of Lightning, inspiration, an instance of genuine and pure Knowing. Non-physical before physical. The physical comes out of, is birthed from the non-physical. Picture a dark cloudy night. You can see nothing the darkness is so thick. Then out of nowhere a blinding flash of white light, lightning! For an instant, you can see, but it’s so quick your physical eyes can only capture a vague and unconvincing image of what lies before you. But that is enough for the mind to start generating ideas. You begin to imagine and think. The movement has been set in motion.

Now you can ponder it, put it all together and feel how it directly touches and pertains to your personal life. Then after it reflects inward on both a physical and non-physical level, hopefully, you will see the awareness expand outward and encompass all around you, the world, and the universe. 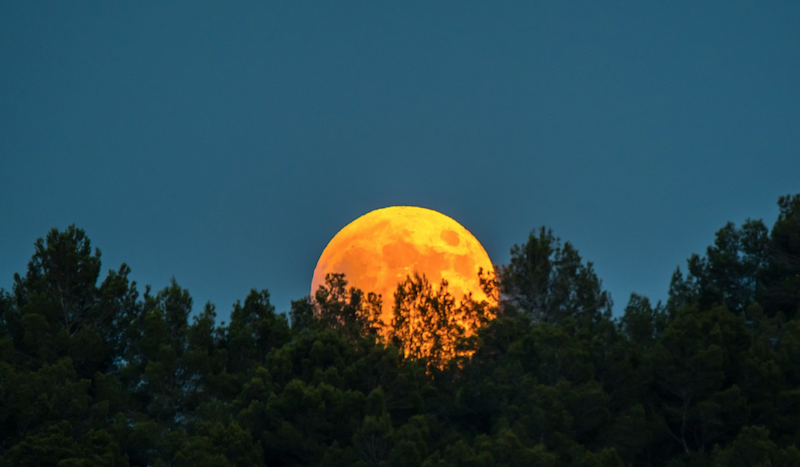 Hey, do you do Netflix, @Nord Wolf ? Im sure enjoying a new show, six episodes - cool resourceful gal is stuck in the woods.

so I am happy botanizing the fruits she collected from various berry bushes, in last night's episode.

And the bear gave her advice.

I like to see this resourceful story told.
Yes, the July moon.

There has always been this intense thing, called summer.

I recall sitting out on my collapsing deck, and this really warm breeze came through around 10 pm, on a dark summer night.

And I was 16 again. The temperature triggered a whole host of memories tied to a summer's night. And this heat. It was unrelenting then, because people did not have air conditioners.

You adjusted to the environment you lived in. Now, why would anybody do that?
It certainly has been the season of fire....heat. It's also destructive. Do the Indians (which tribe?) believe that we have a certain number of years of this intensity and then a tapering?

July is a difficult month and here, August is just as bad, this year even worse because the heat didn't build up slowly, but was extreme an entire month early. But we're on the downside now, so this summer will soon also become another memory.

Summer has been especially difficult for many parts of our country this year. Yes, the season of fire...an apt description. It makes one realize that yes, once again, we're at the mercy of the seasons. So we are. Lenora.
Rufous McKinney said:
Hey, do you do Netflix,
Click to expand...
On occasion, but I tend not to watch much. What is the show called?

Rufous McKinney said:
You adjusted to the environment you lived in. Now, why would anybody do that?
Click to expand...
I agree, when we were kids, and earlier in life when we were healthy, our bodies would adjust. It is what the body does; adjust, adapt and live. But I've noticed with ME/CFS that ability to adjust to many things has dropped off considerably. For me, I'm no longer able to adjust to extreme temps. With high heat, for example, my body cannot keep it out. My lungs are too weak these days, and so the heat invades the body and cannot escape. The longer the heat exposure, the more my internal body inflames, turns to knots, slows down circulation, increases pain, etc, etc, etc...
It would be a great thing to have the body be able to adapt and adjust as it once did!
lenora said:
Do the Indians (which tribe?) believe that we have a certain number of years of this intensity and then a tapering?
Click to expand...
I couldn't point a finger toward any specific tribe that would hold that belief, no. It is possible of course. I think that issue though, is that the environment and world has changed so much from the times of the old beliefs, that the patterns that helped people understand the world aren't even close. Personally I feel we are in uncharted territory as to the environment, just like living with ME/CFS.
Nord Wolf said:
Personally I feel we are in uncharted territory as to the environment, just like living with ME/CFS.
Click to expand...
agree....I dip into alot of issues with forest management, part of the topics that I am interested in....

and the assertion that indigenous have alot of knowledge about the topic.

Well they may, but the ecosystems are not the way they used to be, things are very different now.

We are all trying to figure out how to move forward with these great changes imposed on the landscape.
Nord Wolf said:
What is the show called?
Click to expand...
its Keep Breathing....Netflix

I realized there are alot of shows that are like reality shows with survival mode going on. Mostly I don't watch that type of thing.

I liked this because its...one person's drama. But its a young woman. Reflecting on her life, as she struggles.

A recent Jason Mamoa film is rather good, filmed in the snow of Newfoundland. He has to save the family from the bad guys. He does a very good job of showing us how to do that.
You must log in or register to reply here.