In the beginning, there were no neurotransmitters, and the brain was without form, and void of activity. (Well, O.K., maybe it had the appearance and structure of a mushroom in the morel family, or some corals, and maybe it had some kind of activity as indicated by galvanic responses and "animal magnetism".) Then, there was a flash of insight! Scientists said, "let there be lightning" in the brain, and found electrical signals. (This was the heyday of electrical discoveries, so the idea was trendy.)

There were a couple of problems with electrical theories of the brain: signals traveled much more slowly than electrical signals in wires; most neurons were not directly connected to other neurons; a synaptic cleft, measured in 10s of nanometers, intervened. Some kind of conductive glue (solder?) seemed necessary.

While nothing like solder turned up, in 1921 Otto Loewi found a chemical being released from the vagus nerve of a frog when that nerve was stimulated to increase heart rate. This was acetylcholine. It turned out to be important at many neuromuscular junctions, in the peripheral nervous system, and in parts of the central nervous system.

For a while, this looked like the key to the entire nervous system, just the ticket to connect up all those electrical discharges by neurons. There were some ominous discoveries, like the fact that botulin toxin operates by suppressing acetylcholine release, but, for the most part, it looked like electrical measurements were the wave of the future. (Any number of bad science fiction movies attest to this belief.)

In researching the history of other neurotransmitters, there is a serious problem. Many of these chemicals were known long before their specific role as neurotransmitters was confirmed. This may make it look as if discovery of their status came much earlier than it did. Many have multiple roles, and not just as neurotransmitters. In an ancient period when part of my education took place, glutamate, GABA, epinephrine, dopamine, histamine, serotonin and vasopressin were on the list, at least as suspects. This was about as complicated as anyone at the time could hope to deal with.

Going in the opposite direction, even more surprising discoveries showed that simple, highly-reactive gases could be neurotransmitters: NO, H2S, CO. The discovery that tiny amounts of carbon monoxide were natural components of a healthy nervous system was a stunning surprise in 1993. The consequences of these surprises are still being digested.

There may be still more. Is the peculiar response to N20 an indication that this, also, is a neurotransmitter? Similar reasoning helped explain why people remain highly vulnerable to carbon monoxide poisoning. If a healthy nervous system generates tiny amounts of CO, the body can hardly be expected to produce a strong warning response to CO poisoning.

Therapeutic agents to manipulate neurotransmitters have a checkered history. Attempts to extract and purify the active agent in opium, to separate the "good" effects from the "bad" effects, began with codeine and morphine. A later, more sophisticated, attempt resulted in heroin.

Strange as it may seem today, this was a trade name chosen for marketing purposes by an 'ethical pharmaceutical' company, Bayer. You can see it displayed along with another big success of theirs, Aspirin, here. 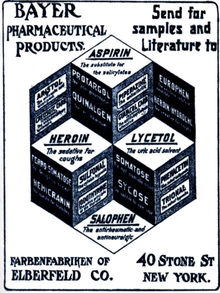 Attempts to purify the active ingredient of coca leaves followed a similar path with cocaine. Sigmund Freud was enthusiastic about the therapeutic potential of cocaine until he found that a close friend and fellow medical researcher had secretly developed a serious dependence. (His real subsequent efforts to treat cocaine dependence turn up in the fictional Sherlock Holmes pastiche "The Seven Percent Solution".)

Attempts to isolate and synthesize the active ingredient in Ma-Huang, ephedrine, led to the synthesis of amphetamine. This also has problems with dependence and induced psychoses, memorably portrayed in the movie "Vanishing Point".

None of the researchers of psychoactive drugs before Loewi could be charged with deliberately manipulating neurotransmitters because none were known to exist. Once discovered they presented a different problem, "where in the body were they used?"

Later work involving multiple neurotransmitter systems was predicated on a model like a kind of subway/underground system where signals could do something like "take the green line from Islington to Bloor-Yonge, then take the yellow line to Summerhill". The problem was that nobody had a map of the systems. (To get a feel for research in such a situation, an English monolingual can try traveling around the Tokyo underground using only the kanji place names.)

In 1971, Candace Pert, working in the laboratory of Solomon Snyder at Johns Hopkins University School of Medicine, created the first detailed map of opioid binding locations in the brains of rats. Where researchers who thought about the problem expected a subway map, something unexpected appeared. As the resolution of the maps improved, a speckled pattern of regions no one had anticipated was revealed. What had previously been seen as uniform gray matter turned out to be terra incognita, or better oceania incognita, with hundreds of little islands of activity.

As if all the previous sources of complexity were not enough, another discovery in the same period was that characterizing parts of the nervous system according to the neurotransmitter used was not enough, there were many different types of receptors for the same molecule. While much of the research world still hasn't caught on to the implications, it may be significant that Candace Pert made a number of appearances in the film "What the bleep do we know?".

The above primarily concerns research on neurotransmitters, some of the important biological signaling systems connected with ME/CFS and many other neurological disorders. What happened in therapeutic use during this period of confusion is a topic for my next installment.
Share: Facebook Twitter Reddit Pinterest Tumblr WhatsApp Email Link

thanks for the history, interesting. I am intrigued by Candace Pert and Peptide T, would like to know more about that. I have seen What the bleep do we know a couple of times with my new age friends and I like it although I get confused because it seems like a fine line to be open to the mind-body healing paradigm and then transverse the threat of new DSM changes and CBT/GET etc....not sure how to reconcile all that.
As a confirmed curmudgeon, I tell people I'm an alien in this millennium. Truthfully, I wasn't New Age when the snake oil was new. Many things with that label have much longer histories than acknowledged. (You might find some new age ideas in Ptolemy's Tetrabiblos.)

I am willing to admit I don't know a great deal about what goes on in my head or body. There is considerable distance still to be covered between objective reality and the world in my head.

This isn't as different from the world of atoms and smaller things as often claimed. The big, complicated 'standard theory' of elementary particles can explain everything except for a couple of minor items: mass and gravity. There would be little problem if all elementary particles were mathematical points with zero rest mass. We still get along pretty well with the partial explanations available most of the time.

Learning to live with your ignorance without making it permanent is an important part of all learning.
You must log in or register to reply here.