Dioxin degradation is bad with CFS and gets worst with time

For the third item from the Metabolite Explorer, we return to a LOW item, Secondary metabolite degradation: Dioxin degradation. Here we see

I speculated that the ability to degrade dioxin will diminished and found that anyone who specified an onset, was a value of 1 or less and found this chart (that really needs more data): 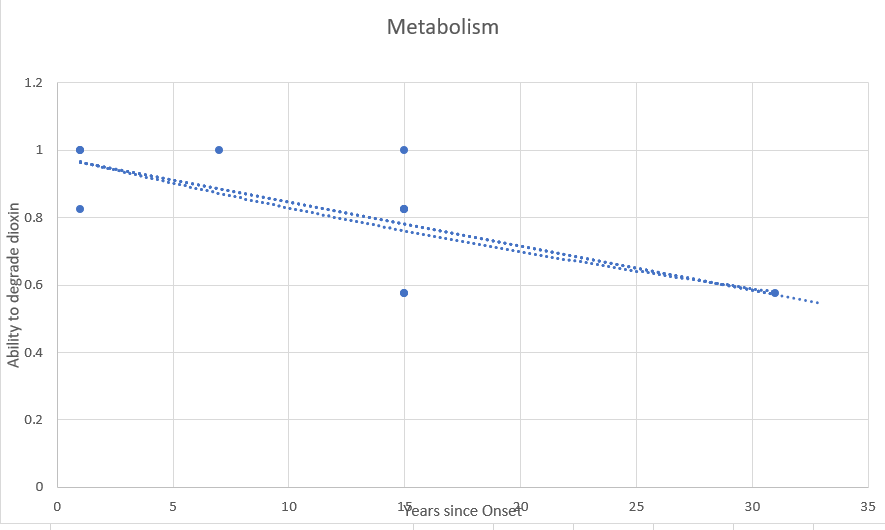 We all know the term dioxin and usually associate with man-made evil chemicals associated with PCBs. This reduced ability to degrade dioxin may means increase culmination of dioxin in the body for some (not sufficient clearance for the intake).

"The terms ‘dioxins’ and ‘dioxin-like compounds’ are used in literature when referring to a large family of chemical compounds that are found in trace amounts in nearly all realms of the environment....Dioxins are the byproducts of both anthropogenic activity and natural processes. "[src]

What is the main source of dioxin in the environment, according to the EPA, Backyard burning of refuse accounts for 35%!

Some Literature
Bottom Line
If you have a low Dioxin degradation, then the best information appears to suggest:

Why do you have a low rate? The bacteria that are capable of degrading are being slowly pushed out of your microbiome. Unfortunately, I have not been able to find out which ones they are in the human microbiome.

Do not expect quick results. To reduce half of the existing dioxin is 7 to 11 years, with a low degradation rate, it may be even longer without some of the above.

This is an education post to facilitate discussing this approach with your medical professionals. It is not medical advice for the treatment of any medical condition. Always consult with your medical professional before doing any changes of diet, supplements or activity. Some items cites may interfere with prescription medicines.
Likes: Sundancer
Share: Facebook Twitter Reddit Pinterest Tumblr WhatsApp Email Link