The data from 14 people to date reporting in the microbiome metabolism explorer has a high percentage with a very low metabolism for D-Arginine and D-ornithine (10/14). There are a few others that are high (4/10). None normal. This variation is expected because everyone’s shift is different.

At face value, this means that both arginine and ornithine that is taken into the body is not effectively processed and suggest high levels of both would be in the body OR low levels of chemicals they produce.

Diagram from Arginine Metabolism: Boundaries of Our Knowledge [2007] 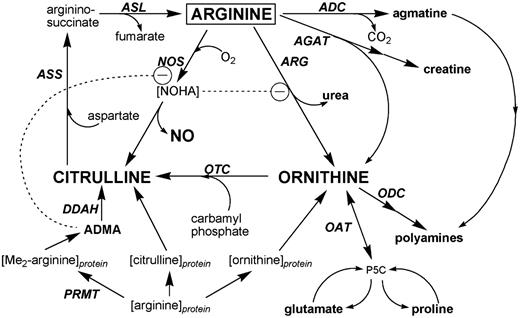 This agrees with other findings:

Arginine
Ornithine
Again, the products produce from this amino acid will be greatly reduced.

Leaky Gut
“Arginine and ornithine are precursors of nitric oxide and polyamines, respectively. These metabolites intimately participate in permeability and adaptive responses of the gut. The liver possesses high arginase activity as an intrinsic part of urea synthesis and would consume most of the portal supply of dietary arginine. The gut reduces this possibility by converting dietary arginine to citrulline, which effectively bypass the liver and is resynthesized to arginine in the kidney. Dietary ornithine supplementation, in the form of ornithine alpha-ketoglutarate (OKG) can be considered as an arginine precursor. Several supplement studies have shown both amino acids to promote growth hormone and insulin secretion with anabolic effects in postoperative patients. Their intermediary metabolites (for example, glutamine, proline) may also be of benefit in trauma metabolism. Specific effects of either amino acid on the gut are poorly reported.” [1994]

Bottom Line
Remember that this estimation of D-Arginine and D-ornithine metabolism is based off your gut bacteria – nothing else is known about you, no blood sample etc.

With time, I hope to have this pattern confirmed from the uBiome and symptoms shared on our analysis site.

I was unable to identify from scanning the literature, the bacteria that are important for this metabolism (hopefully a reader will find such!).

If your metabolism function is estimated to be low, then supplementation with both Ornithine and arginine seems to be suggested. With arginine, convention wisdom is that lysine should be taken with it.

There is no clear study dealing with low metabolism. Ornithine occurs is very low amounts in food and thus with a reduce metabolism, taking more may produce more end products.

If you have herpes, care need to be taken:

“In the studies conducted, arginine deficiency suppressed herpes simplex virus replication in tissue culture. Lysine, an analog of arginine, as an antimetabolite, antagonized the viral growth-promoting action of arginine. The in vitro data may be the basis for the observation that patients prone to herpetic lesions and other related viral infections, particularly during periods of stress, should abstain from arginine excess and may also require supplemental lysine in their diet.” [1981]

In this case zinc supplements with Glutamine may be an alternative approach.

In the case of arginine, we read of additional side-effects from too much. From livestrong.com

“Digestive Problems
L-arginine can increase levels of stomach acid, particularly gastrine. Too much gastrine can result in stomach pain and nausea. You may also experience bloating, cramps and diarrhea.

Allergic Reactions
Some people experience anaphylaxis, or an allergic reaction, to L-arginine. The severity of anaphylaxis increases with dosage. Symptoms include itches and skin rashes, swollen eyes, and in the worst cases, shortness of breath. People with asthma may be especially prone to this.

This is an education post to facilitate discussing this approach with your medical professionals. It is not medical advice for the treatment of any medical condition. Always consult with your medical professional before doing any changes of diet, supplements or activity. Some items cites may interfere with prescription medicines.
Share: Facebook Twitter Reddit Pinterest Tumblr WhatsApp Email Link