ADHD in FM and CFS -- with Microbiome aspect

Cognitive impairment is common in CF[2017]. A reader asked about ADHD, the hyperactivity of Attention–deficit/hyperactivity disorder is not typically reported, but the attention disorder is. There is not much published yet, but a few items were interesting:

uBiome Analysis Page
If you have uBiome, after uploading/logging in, go to:
http://microbiomeprescription.azurewebsites.net/condition/condition?code=3

And you can see how closely you match the profile. 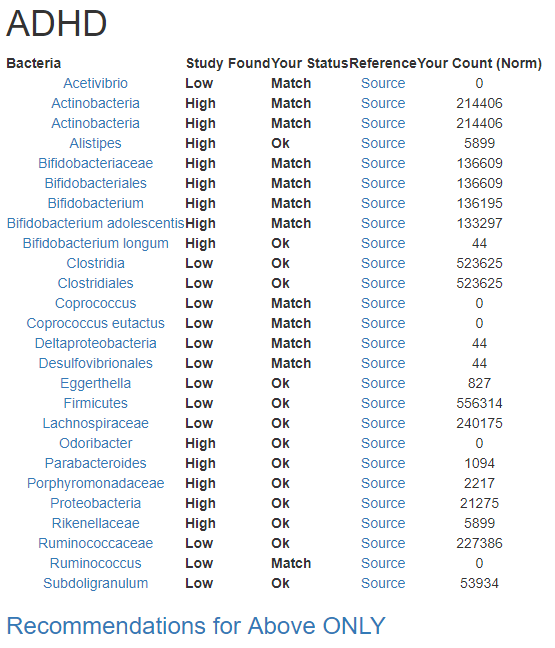 As always with these conditions, recommendations are available to address the bacteria shifts associated with the conditions.

Bottom Line
The available study was done on Attention–deficit AND hyperactivity combined. We do not know which bacteria is associated with with. I would challenge the statisticians / AI / machine learning types to work from the above bacteria and the reported symptoms to try isolating those that are attention-deficit related.

This is an education post to facilitate discussing this approach with your medical professionals. It is not medical advice for the treatment of any medical condition. Always consult with your medical professional before doing any changes of diet, supplements or activity. Some items cites may interfere with prescription medicines.
Likes: ljimbo423 and SueJohnPat
Share: Facebook Twitter Reddit Pinterest Tumblr WhatsApp Email Link