A IT Reader’s Medical Challenges

I usually avoid getting too involved with readers — for a simple reason: this blog and the microbiome analysis site is already a time consuming evening and weekend gig (full time IT day job). I am not a physician or medically trained, so “patient history” is an inappropriate term to use.
This reader came via LinkedIn (where I have started posting items from this blog to confuse all of my technical nerd contacts ). The number of issues, technical documentation provided, and detail history made if a good review example.

The last time I felt great was in high school, I was eating lots, exercising 2-3 (swimming) hours a day, sleeping well, studying hard. However, even though I was doing well, after a swimming race, I had trouble getting out of the pool and was too tired, no other swimmers were like that. I knew that at age 15 I was sick due to the excessive fatigue.​
Ding: typical CFS has a “day-after exhaustion” after exercise. I recall my Stress ECG Test — absolute flying colors. Next morning, horrible. This hints that something else may be in play.

I had mercury fillings since I was about 8 years old and in November 2017 I got them replaced and since then my chelation treatment (DMSA) has been easier in terms of symptoms. My symptoms started when I started college (2006), I wasn’t getting much sleep due to a noisy heating element and had frequent heartburn[GERD –
gastroesophageal reflux disorders ]. I would sometimes be sad but I attributed this to a lack of exercise. Also, I have had misophonia a year after starting university (started 2006, finished 2010).​
Partial sleep deprivation is associated with shifts in 4 bacteria families, and 20 genus (list). Sadness is associated with depression in medical terms. It is associated with 13 genus (diagram). Cross comparing the genus lists, there was nothing in common (suggesting that sleep deprivation and depression are not strongly connected). It does imply up to 33 genus may be altered. For GERD, we can add a few more … :

Although far from comprehensive (only approximately 24 clones were sequenced per sample), the study found Veillonella (19%), Prevotella (12%), Neisseria (4%), and Fusobacterium (9%) to be more prevalent in patients than in controls.
Microbiome in Reflux Disorders and Esophageal Adenocarcinoma [2014]​
Reminder that I use: “The microecologic disease theory, or the “Pathogenic Microbial Community” theory, is a new model in which the entire community contributes to pathogenicity, with no individual community members being classified as pathogens.13,14Dysbiosis is a similar concept that refers to an abnormal state of the microbial ecosystem, dividing commensal bacteria into “protective” and “harmful” species. With dysbiosis, the cause of certain chronic diseases is an upset balance between the two groups.13 ” [2014] This model means that AI/Machine Learning is the best tool for analysis.
Reader’s state: ‘sub-clinical dysbiosis’, that is, most gastroenterologists would state “you are fine — I see no issues of concern”.

After university (2011), I went to Asia for a week and a few months after I came back with a duodenal ulcer (found upon endoscopy), it was a stressful experience both emotionally and sleep-wise since I went through 2 12 hour shifts. I presented with fatigue, blood loss, dark stools, coffee ground vomit, collapse, blindness, urinating in bed, sleep loss, pale skin. I then went on to working in one Asian city for about a year (2012), a year after my initial trip to another Asian city , came back to the USA and became very fatigued when I was in my parents home — especially when I was around the carpets (was there for a few months).
​
Ulcers are usually associated with Helicobacter pylori. (one study found only 27% of these ulcers had H. pylori [2001]). We do see via DataPunk, a large number of bacteria that clusters with (i.e. if you have H. Pylori, you will often find these)

I went back to Asia to a number of cities (after Fukushima) and lived there for 2 years and upon using a new teflon pan, I got a headache, was dizzy, nauseated and got tinnitus (2015).​
The carpet scenario with the teflon response implies multiple chemical sensitivity. While teflon is ‘normally considered to be safe’, poorly made or overheated pans are known to release “perfluorooctanoic acid (PFOA) ….
it can stay in the environment and in the human body for long periods of time. “[cancer.org] The table below shows the impact of a very closely related chemical. 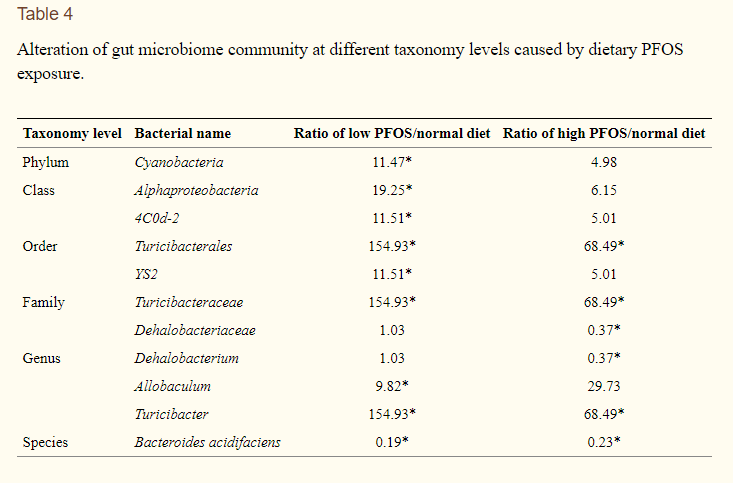 Dietary Exposure to the Environmental Chemical, PFOS on the Diversity of Gut Microbiota, Associated With the Development of Metabolic Syndrome [2018]
At this point, my mind go to suggesting an Olestra diet for a few months. YES that ugly horrible synetic fat – Ken, you must be kidding!. Why, see “I would never do this if there was an alternative” in this 2013 post. He is already doing chelation treatment (DMSA) — this is a different form of chelation. I have seen it work for MCS persons after a chemical exposure — they return to normal much faster.

Here are my present problems that I seek help with:​
Suggestions to discuss with your medical professionals
As always, not medical advice, just personal observations that could be relevant.
Brain Fog
This can originate from many causes. For myself, coagulation is a major component.
Toenail Fungus
I am curious if there was any testing for which particular fungii it is? As well as susceptibility to various treatments. I recall reading that mercury exposure results in reduced susceptibility for many bacteria and suspect it may be the same for fungi.
Insomnia
My first take on this is hypoxia (a.k.a. sea-level altitude sickness). Due to low delivered oxygen level to the brain. ” In the elderly with CVD, SDB mediated by hypoxia can be associated with more insomnia and a worse prognosis. ” [2015] . Brain Fog and hypoxia are associated. Back in 2000, I saw the strong correlation between a subset of CFS symptoms and altitude sickness symptoms.
This issue of poor delivery of oxygen and blood would also account for:
Infections/scars on my lower legs
This one initially stopped me — because I have had a similar issue which I did not get connected to CFS until now. For myself, using Triamcinolone Acetonide ointment reduced it greatly but I still see some ‘rough spots’. I suspect now , as above, that it is an impeded circulation issue which prevents the body naturally addressing issues. As a FYI, over the last 10 years I have had recurrent sepsis on my lower legs. Do you have any foot neuropathy? I have a little on one toe and associated it nerves dying from a lack of oxygen — hypoxia.
Multiple Chemical Sensitivity
There is nothing that I can really add here that I have not covered in prior posts. I do not have it active at the moment, but did experience it for a few months during an acute phrase. My workplace is very saturated with chemicals (although it was suppose to be chemical free a decade ago) – so much so that coming home from work (because my wife has severe MCS)
I do not react physically, but do attempt to avoid fragrances for the sake of my wife.
Only suggestion is OLESTRA chips at least once a day to remove reside chemicals that may be contributing .. Make sure you read about frequent response (toxic smelling stools etc) before you start.
“Ding” revisited
I suspect that the fatigue as a child may be due to impeded circulation. The ability to clear toxins and deliver oxygen was less than other people. If this is correct, then your microbiome would shift to species liking lower oxygen levels. This suggests that increased oxygen levels (oxygen mask or hyperbaric chambers) may assist.
Likes: Wayne
Share: Facebook Twitter Reddit Pinterest Tumblr WhatsApp Email Link

Have you tried nattokinase to thin blood/clots?
Yes, and also lumbrokinease and serrapetase. They are my 'trinity'
You must log in or register to reply here.